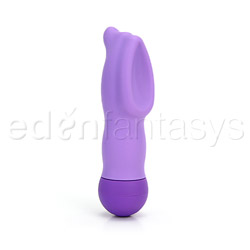 Back to the Drawing Board, Buzzy Dwarf!

Quality clitoral vibrators that really seem to know your body well are nothing new; from Nea to Sasi, many companies have tried their hand at body-specific vibrations, some with more success than others. With this offering Cal Exotics throws their hat into the ring, and for the price yields moderately impressive results. Still, at the end of the day and in spite of the attempt at innovation, I'll take the Xtreme Pak over this.
Pros:
Affordable, non-porous, strong vibrations, interesting design.
Cons:
Design not always practical, loud, buzzy vibrations, inconvenient dial.
Rating by reviewer:
3
extremely useful review

Love has a scoop-like bulge toward the tip, which lends itself to very focused stimulation that isn't clit-numbingly pin-point. Instead, it somewhat cradles the clitoris, evenly distributing vibration throughout the hood and surrounding area. By gently moving the toy up and down, I found that Love could alternately and rhythmically stimulate my clitoris directly and the flesh around it. If you should desire some more intense, concentrated stimulation, Love features a small, smooth nub that protrudes at its tip. If you can get past the fact that this round bulb gives the vague impression of a certain childhood friend, this part of the toy can provide very intense vibration. At its lower settings, this toy provides teasing sputtering vibrations, and at its maximum can be rather desensitizing.

I have also found that with the help of some extra slick silicone based lube, this toy can be fun to trace the inner labia with, and even dip shallowly into the vagina in order to stimulate the G-spot with the dwarf hook. However, this toy should not be used anally due to its lack of a flanged based. Stimulating the perineum and outer anus is not risky, but insertion is. I also wouldn't recommend any heavy thrusting vaginally with it simply because the scoop aspect of the vibe could potentially be rather irritating. However, a little slow massaging has been nothing but lovely in my experience. Please remember that if you do use this at all anally you should clean it thoroughly before putting in the mouth or vagina. Ideally a condom would be best to use in this scenario.

Love is made out of hard velvet cote plastic, entirely seamlessly and wonderfully smooth. Velvet cote is easily my preferred material when it comes to plastic: it manages to feel soft and intimate while still having enough texture to stay put and not slip around too much. Love comes in one color, a soft lavender for its shaft and a darker, bolder purple distinguishing its battery cap and speed dial. This toy is tasteless and gives off a very mild plastic odor that is only noticeable when placed right under the nose, and even then, this smell fades with time.

Love's most interesting feature is the hollowed, scoop-like protrusion. Looking something like a clitoral hood sans the clitoris, the scoop does something unique by providing a surface area made with the geography of the external genitalia specifically in mind. A little nook is created to cradle your clit in, while the remainder of the vibe is long enough that you can easily grip it and maneuver it as necessary.

Unfortunately, I found this particular feature problematic in a few ways. The biggest problem I found was that the "scoop" was quite a bit too large; I have small junk, but I doubt that this sized spoon would be a snug fit for many folks. For this reason there was a bit of slipping and sliding in use, as well as a diffusion of vibration throughout too great an area. I found all of this spread-out stimulation a little confusing and slightly irritating. Occasionally I would find myself looking down during use to check to see if my parts and the toy were properly aligned. The need to use sight instead of feel to get things on track sort of secures the last nail in the "confusing vibrations" coffin.

However! I have found that by turning the toy horizontally and rubbing the ridges up and down across my clitoris has provided some great sensation that did not require my reading glasses to be certain of. I've also found that by holding the toy vertically in place very firmly and moving it slightly up and down that the toy can feel quite good without going off course. I do think this toy can be enjoyable, but it takes a little work in my experience. Perhaps the scoop is not pronounced enough, although I suspect it might need to be scaled down a bit as well (it's well more than a centimeter wide!)

On the other hand, the Dopey Dwarf hat-nub on the top does just what it looks like it would; it provides very intense (probably too intense for most) vibrations to a very small area. Holding this thing directly on my clit was a burst of stimulation following not too shortly after by mild to moderate desensitization. For those that prefer stronger vibrations this is a great feature, but I couldn't stand it for any extended amount of time. The velvet cote makes it less slippery than other hard plastic surfaces, so maintaining contact with this end was consistently easy to do. Another well thought out feature of Love is its knotted, undulating body which makes keeping a grip on your vibrator very easy to do. You'd think that with attention to such a minor detail as that, we'd have ended up with a better report of the control dial!

The speed dial is where I was a little boggled by Love. A voluptuous, violet bulb at the base of the vibrator, the speed dial is nearly seamlessly integrated into the battery cap, both of which twist off in the same direction. At a glance the seam that separates the two functions from one another is not readily apparent; the speed dial is the section farthest away from the tip of the shaft. The dial itself was stubborn and did not easily turn, and was also difficult to grip as its circumference was not ridged as many speed dials are. More than one during use did I accidentally begin to unscrew the cap when what I meant to do was increase the speed in order to rocket me to orgasm. SERIOUS bummer. This was maybe one of the most irritating aspects of this toy.

The good news about the battery cap (which accepts a single AA battery) is that it screws in very tight and securely, making it waterproof not just in name but in practice. I am not in the habit of submerging toys, but have used this in the shower with no trouble. The only problem with taking this guy to the shower with me is that I share my apartment with three other roomies and this little dude is BUZZY. Not just in terms of sensation, but in terms of its sound. Not Hitachi loud, but louder than I'd like for the acoustics of a room covered on five sides by tile. Like many dial vibrators, there were only a handful of distinct speeds, the lowest being a quiet chugging train-going-up-hill throb and the highest being a shallow, high intensity buzz that will definitely be heard through a door if all else is quiet in the house. On the lower settings, this can be heard through a blanket but not the walls, but if you value power and privacy then this might not be the one for you.

This is an easy lube-up and clean-up toy. The hard plastic surface is compatible with silicone, water and oil based lubes, you can feel free to reach for your favorite poison when the time comes. Hard plastic has a very low porosity (and is phthalates-free!) so you can clean it easily with soap and warm water or a sanitizing baby wipe. However, because the toy is still somewhat porous, it is not possible to completely sterilize it, so you may want to use a condom when sharing with a partner.

Hard plastic will not negatively interact with other materials such as silicone or jelly, so you do not need to store is separately. You may wish to keep your toy in a Ziploc bag as I do, simply because this prevents dust and dirt from building up on it. Please store your Love with the battery removed to prolong the life of your toy and the battery!

Overall I think that with some work this toy could be a really excellent one. The knobby shaft for easy gripping, the clit-loving scoop, the tiny orgasm extracting nodule... all of these are excellent ideas. However, Love was foiled in my opinion but some easy to fix but nevertheless careless flaws. With a smaller scoop, rehashed battery cap and dial, a more varied and subtle selection of vibrations, and a muffled motor this toy might have gotten 5 stars from me.
This product was provided free of charge to the reviewer. This review is in compliance with the FTC guidelines.