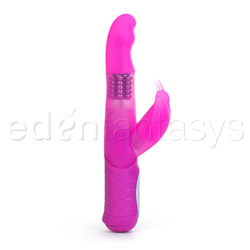 Be Still, My Fluttering Heart!

The Petite Flutter is a rabbit vibrator from Cal Exotics that can be used to stimulate the G-spot, clit, and vaginal opening. The box states this toy is waterproof, but there is a small gap when when the cap is on, so I would not suggest submersing. It is at least splash-proof, however, and can be taken into the shower. This toy would work well for beginners, for those who prefer gentle vibrations, or as a warm-up or teaser toy. The Petite Flutter would work well for solo sessions, in conjunction with other toys, and can also be used with a partner.

This toy is made of 100% silicone and is translucent pink with stainless steel beads inside. The texture is somewhat slick and almost jelly-like. I did perform a flame test on this toy though, and sure enough, it is silicone. The toy is squishy and almost gummy but not sticky. The toy picks up dirt, hair, and lint extremely easily, so that is something to be aware of. The handle is made of ABS plastic in the same shade of pink as the silicone. The toy had no smell when I removed it from the packaging.

Here is a side view of the toy: 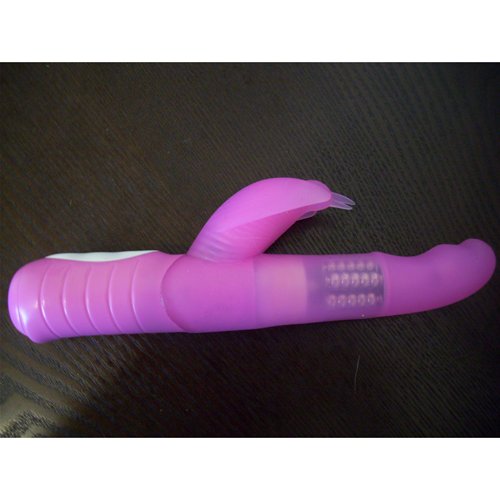 The Petite Flutter runs on 3 AAA batteries and is operated by an LED lit control panel on the handle. The buttons only require a very gentle pressure to be activated, which is nice for those who may suffer from joint problems in their hands. Though they are activated easily, they are not so sensitive that I have had the problem of accidentally pressing buttons that I didn't intend to press and shutting the toy off. The bottom button is the power button and it lights the control panel up in blue when pressed. The clitoral attachment and the shaft are operated separately by the remaining two buttons.

Here is the control panel when off: 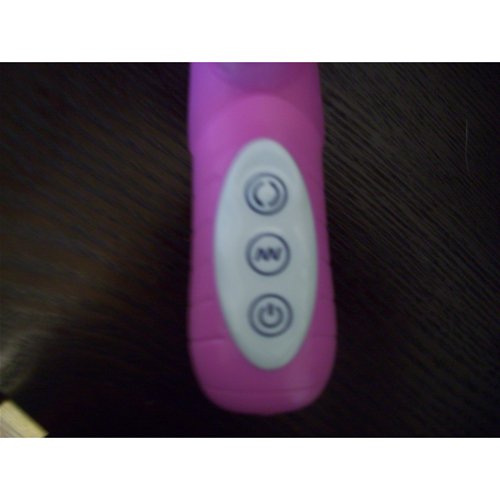 Here it is when on: 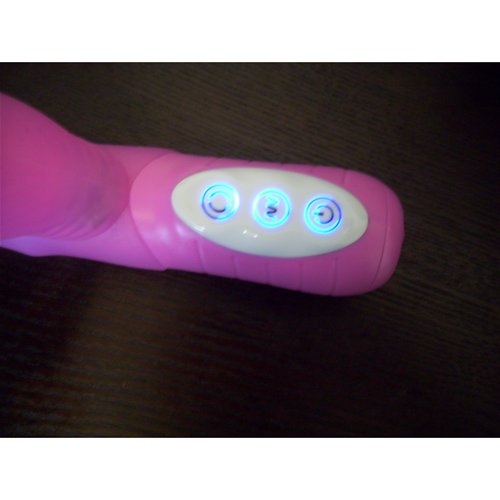 The top button controls the speed of the rotation of the shaft. There are three different speeds, which we will call low, medium, and high. The lowest setting is a moderately paced rotation and may still be too fast for users who prefer slower speeds. The medium setting is a fairly quick rotation, and the high is even faster. Those who enjoy rabbit vibrators with fast rotation will likely really enjoy the high setting. The fixed metal beads rotate around the shaft at the same speed as the rotation of the shaft. While the box notes that this toy is quiet, and that statement is true for the vibrations, the rotations are somewhat loud. They're not Hitachi loud, but you can hear them through a closed door.

The bird-shaped clitoral arm has 7 different functions. The first three arm different speeds of straight vibrations, which are low-pitched and "thrummy". The vibrations in the clitoral attachment seem to be perplexingly located in the bottom of the bird and are felt strongest on the back of the attachment. If not using the insertable portion of the vibrator, you could very feasibly use the back of the bird in order to feel stronger vibrations. The beak of the bird is the part that will likely come in contact with your clit, as it did on my body, and the strength of the vibrations are much different when measured there. On the lowest setting, the vibrations are very gentle through the beak, and I would rate them at 1 bee. On the second setting, they were slightly stronger, maybe 1-1/2 bees. On the highest setting, the vibrations were still pretty gentle when felt through the beak, at about 2 bees.

Water-based lubes are suggested to be used with this toy. Silicone-containing lubes should be avoided, as they can react with silicone toys. If you do decide to risk this, please spot test first to make sure you don't ruin your toy. The Petite Flutter, like other silicone toys, can be washed with warm water and detergent-free soap, 10% bleach solution, or a non-alcoholic toy cleaner. It is best to store without the batteries inside it to prevent corrosion and so that the toy doesn't drain your batteries.

The toy is packaged in a clear plastic box with the toy's name on it. There is a molded plastic inner tray that holds the toy in place. There are no photographs on the box, and the only material included besides the toy is a slip of paper explaining how to put the batteries in.


Here is the front: 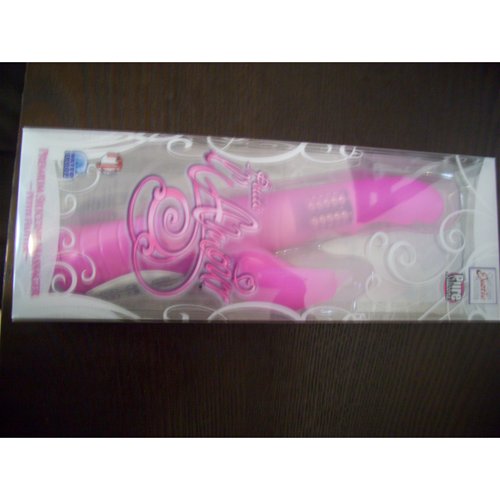 Here is the back of the box: 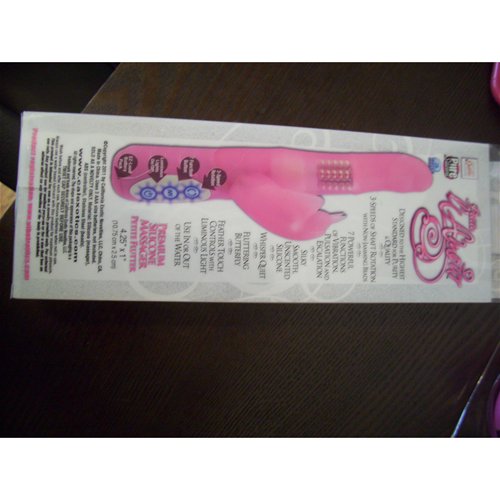 I was surprised at how fast the lowest setting of rotation was on this toy. I own another Cal Exotics rabbit, the Petite Couture Ecstacy, and the lowest setting on the Petite Flutter was higher than the medium setting on the Ecstacy. The speed of the rotation on the Petite Flutter was too fast for me, personally. I'm also not really one who needs very strong vibrations in order to get off, I'm a 3 bee kind of girl, but I found that the vibrations in this toy couldn't even get me close. The low pitch of the vibrations felt nice, and I could see myself using this as a warm-up toy, but I needed something a little stronger than this. I also really liked the idea of the rotating metal beads, since I've had toys with beads in the shaft before and enjoyed them. I couldn't really feel much of a difference with this addition, however. They make the toy look neat, but they did not stick out enough from the silicone enough for me to really feel them. That being said, for someone who is new to sex toys or just really likes gentle vibrations, this could be a good choice. The vibrations do feel nice, but for me they just weren't "oh my god" nice.

Petite couture Ecstasy
$79.99
Follow-up commentary   I still don't like it 2 months after original review
This toy has held up well, though I don't try to use it very often. I feel like there are so many better silicone rabbit vibrators in a similar price range.
This product was provided free of charge to the reviewer. This review is in compliance with the FTC guidelines.