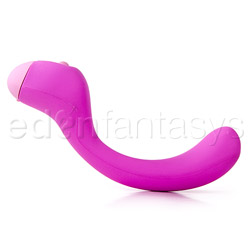 This cute, sexy little toy is worth every dollar! It provides a plethora of pleasure while also being easy on the Ol' budget. It's adorable, sleek, and serves it's purpose well. It's one of those toys you don't have to think too hard about buying...and you certainly won't regret it! Happy Buzzing!
Pros:
Great shape, texture, and vibrations. Good for beginners, versatile, pleasure-packed. Price.
Cons:
Not waterproof, wish it was silicone. Not rechargeable.
Rating by reviewer:
5
extremely useful review

The Smoothie is definitely a G-spot vibe. It EXCELS at providing your G-spot with the perfect amount of vibration and angle of insertion. I think it could also be used successfully as a P-spot vibe for the Gents, but I haven't gotten that far yet. ;) It is actually my first insertable vaginal toy, and my first toy that targets the G-spot. So, for a beginner, this toy is awesome! It's cute, not intimidating, and not too large for the G-spot virgins. Not to mention that the angle of the Smoothie is just right. I didn't find it to be hard to insert the Smoothie with a tiny dab of lube, and it seemed to settle into just the right spot anatomically to stimulate my G-spot. I also think that this toy would be appropriate for most women's bodies; those who have a shallow G-spot (like mine) can hold more of the toy outside their bodies, while women who have deeper G-spots can insert the Smoothie more. Even though it's great for beginners, those that are well versed and experienced in G-spot play will probably enjoy the Smoothie too. I really think it is quite versatile. Some reviewers said that they could use the Smoothie's handle to stimulate their clitoris while it was inserted, but this was uncomfortable and not possible for me. However, the Smoothie is definitely strong enough to be used as an external clitoral vibrator if the mood strikes. I absolutely LOVE this toy, I couldn't believe that after only one try and a pretty minimal effort, I was able to have a great orgasm. My husband also loved this toy; the handle is large enough and well placed so he was able to use it on me as well (with a happy ending!). This is definitely a solo toy as well as a couples toy.

The Smoothie is made of a smooth, velvety, plastic; it has no detectable textures, ridges, or bumps, and no rough edges. It almost feels like some of my silicone vibes. It does not have noticeable or problematic seams (they run underneath the head and along the edges and cannot be felt when toy is inserted) The toy had a very minimal smell that is hardly noticeable after a wash and use. The battery compartment top does have some ridges to allow for easier turning. This vibe has no taste that I could detect.

I think that this toy's biggest asset is it's shape; it's curved, hook-like neck, and bulbous tip really stimulate the G-spot. The narrowness of the neck allows the user to have rocking room and variety of insertion depth. The transition from tip to neck to handle is smooth and flowing; no surprise bumps or angles to hang you up. The toy is firm, so it can really put the pressure on your spots if you like, but it doesn't have any flexibility, so be gentle at first (unless you like to play rough!). This toy is hard to thrust because of it's hook-like angle, but it rocks hella' good. The size was great for me, but may be too small for those who prefer more girth or fullness in their insertables. In terms of travel-ability, you would want to remove the batteries and it has the possibility to be detected during air-travel due to metal pieces. It isn't the most discreet toy as people are curious and ask you what it is when they see it.

The Smoothie has an intuitive and easy-to use set-up; 1 button on the top of the handle, out of the way to avoid accidental pushes that ruin the fun, but close enough to your thumb to switch the patterns while playing. The vibrations seem to originate in the base of the battery compartment but carry throughout the vibrator, all the way to the tip! Love it. The smoothie has 5 different delightful patterns of vibration:
1. low: bzzzzz
2. High: BZZZZZ (my favorite!)
3. BZZZZ BZZZZ BZZZZBZZZZ BZZZZ BZZZZ
4. BZ BZ BZ BZ BZ BZ
5. BZZ bz BZZ bz BZZ bz (the low rumble on this mode seems to almost stall the motor; probably the least pleasurable mode.

Sadly, this toy is not waterproof. It is listed as, "Splashproof," but I wouldn't take it in the shower or wash too closely to the battery compartment or mode button.

The Smoothie is plastic, I just cleaned the end opposite the battery screw cap with some warm water (I avoided battery area and the indent near the mode button to avoid water getting into the battery compartment) and sprayed the toy with some sex toy cleaner. Do not submerge or boil this toy to sterilize, it would be tragic! To be safe, use a condom or other barrier if you plan to share this little guy with a partner! As far as storage, since it did not come with any cute bags, boxes, or cases, I just used a plastic bag to keep it separated from other toys, but I made sure it was dry before I put it away. I just used a water based lube on this toy with great success. ;)

Unfortunately, this delightful toy doesn't come in the package it deserves! A cheap, clear, plastic snap case with some tacky, pink writing cover the package, and don't do the Smoothie justice. It does come with some instructions that are pretty generic, but cover the basics. However, the packaging doesn't specify what types of lubes you can and can't use. The instructions come in 4 languages.

The only drawbacks I see are the lack of waterproofing, which would be awesome. One small problem I had was putting the battery cap on...Maybe I have the dexterity of a 4 year-old, but I couldn't get the angles right and it kept flopping off before I could lock it. However. These are MINIMAL drawbacks and I only address them to be thorough.
Follow-up commentary   I still like it 1 month after original review
My G-spot Smoothie worked for about a month before the last 3 vibration patterns started to malfunction. Now it really only has the first two constant levels of vibration which thankfully still work. The patterns sort of morphed into constant speeds and then abruptly stop working. It's strange. Although it stinks that the patterns broke, I can't say I ever used them...I really only use the constant, high speed vibration so it doesn't bother me. I still use it pretty frequently and still love this toy.

However, if you are the type that love different vibratory patterns and use them often, beware!
This content is the opinion of the submitting contributor and is not endorsed by EdenFantasys.com