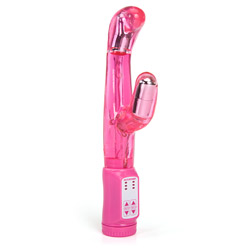 EdenFantasys
Other Lucid dream no. 26 reviews

Doc Johnson's Lucid Dream No. 26 is not only a versatile toy, it's flexible, too -- literally! The angles of the G-spot head and clitoral stimulator are both easily adjustable to help you find your perfect spots while the shaft of the toy stays firm instead of being a flop. This non-animal, pthalate-free TPE rabbit is also virtually silent, waterproof, and has independent controls for each bullet.
Pros:
Flexible G-spot head and clitoral massager, quiet, bullets have separate controls
Cons:
Strong smell, toy is not "pretty"
Rating by reviewer:
4
useful review
The Lucid Dream No. 26 by Doc Johnson comes packaged in a plastic box that is decorated with sparkly teal and plum swirls. The box explains that it is a "flexible vibrator" that is "virtually silent" and features "dual stimulation" and "independent controls". "The feeling is surreal", claims a scroll of text from the bottom in a font that may remind some of "I Dream of Jeannie". The waterproof symbol is the last claim of sex toy joy on the front of the package.

A diagram on the back of the box explains the individual features of the toy. These features can all be verified by simply looking at the toy itself, which is a clear, pthalate free, thermoplastic elastomer (TPE) (the "white" toy is clear, while the "pink" option is translucent pink). When removed from the box for the first time, the smell of TPE may be quite strong for some, particularly for those who have sensitive noses and cannot tolerate the smell of permanent markers. After a thorough wash and airing out, however, the smells grow noticeably fainter. After letting my No. 26 air out for a day, I could only get a whiff of eau de TPE if I put my nose right up close to it.

The control pad is located in the handle/base of the toy, which is white plastic. There are four buttons total, one ^ and v button for each bullet to individually control them. Each bullet has three intensities to choose from. Mixing and matching intensities is easy. While this feature is handy, some may be perplexed as to which buttons control which bullet, as both sets of buttons are labeled "vibration" without any hint as to which bullet they are assigned to.

In use, the No. 26, though not exactly silent, is surprisingly quiet. It is easily muffled by a light comforter and is undetectable in the shower. Its three-speed vibrations are also moderately strong, giving a good balance between discretion and power.

To clean the Lucid Dreams No. 26, use antibacterial soap or a cleanser and warm water. TPE is porous, so it is wisest to cover it with a condom if sharing with a partner. Silicone and water-based lubes are both compatible with this toy.
Experience
In terms of function, this toy delivered. However, I must admit that the smell was off-putting at first... at least to me. My boyfriend was a big fan of the smell since it reminded him of airplane glue. I'm just glad that the smell went away (for the most part) after a good and thorough washing.

Another qualm I had was with the appearance of the toy itself. I liked that I could see the wires and the bullets hanging out in the clear TPE. However, the clear TPE isn't really clear. There are stretch marks and the sorts of things that you might find in, say, glass slag. Since these are most prominent around the base and flexible parts, it is possible that these marks are caused by the stretchy nature of the material. However, these aesthetic problems do not affected the function of the toy negatively.
This product was provided free of charge to the reviewer. This review is in compliance with the FTC guidelines.