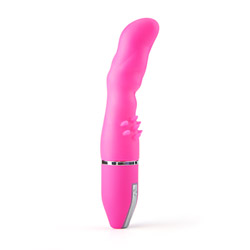 It has several vibration patterns and is waterproof so it can be used in a tub or shower. It's also very easy to operate, even while you're using it.

The design looks like most typical vibrators. There's a bit of a bulge near the top and then it slims up near the base. At the base are also some horn-shaped nubs to stimulate the labia as well. Right in the middle of the insertable part of the vibrator where it thins out a bit is also where the bend for the toy is. You can bend it forward or backwards on it's track and it holds the position very well. Turning it backwards (away from the power button) allows it to bend almost ninety degrees while bending it forwards you can only get about half of that.

As far as size, it's pretty standard with a circumference of almost five inches, and five inches of insertable length. 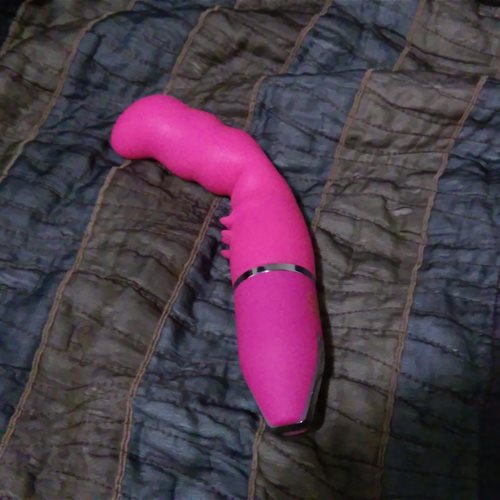 It's not a very loud toy at all and I would compare it to an electric toothbrush. You may still hear a faint buzzing through a closed door, but it's difficult to hear it over the TV or a fan. It's not a loud toy, but it is a strong toy. Even the weakest vibration setting is pretty powerful, but it's nothing overwhelming. Vibrations tend to feel weaker while you're using the toy internally.

It's a waterproof toy as well, and works just as well under the water as it does above.

This toy is very easy to care for. You can clean it up after use with a little bit of warm water and soap or a toy cleaning soap. Normally silicone can be boiled but since this uses batteries I wouldn't boil it. It's also easy to hide in a drawer or something similar when you're done using it.

You can use a water based lube with this toy.
This product was provided free of charge to the reviewer. This review is in compliance with the FTC guidelines.