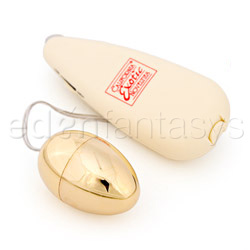 Better than a hard-boiled egg.

Good for thrifty, or novice sex toy users. Inexpensive with variable intensity and just 2 AA batteries needed, but the batteries drain relatively quickly, the toy is kind of noisy, and even the maximum intensity might not be enough for some!
Pros:
Price, intensity controls, use of "common" AA batteries (as opposed to watch batteries).
Cons:
Noisy, batteries drain relatively quickly (after about 2 - 4 sessions with it).
Rating by reviewer:
3
useful review
For the thrifty or recession-panicked sex toy consumer, this toy is (in theory) nearly perfect: it is cheap, and it will get you off. The problems are minor, but can become pretty irritating pretty fast if you really hate noise or recharging batteries. Let me put one caveat here: I am a boy.

I have used this toy on myself, mainly on my stomach and the more sensitive parts of my hips, but I probably wouldn't buy it if it were just going to be used on myself. For me, this was not a very penis-friendly egg; it's simply not designed to fit anywhere that felt especially nice. For the girls that I've used it on, the consensus is that yes, this egg is a good vibrator; but yes, it can be very noisy (especially compared to some of the other similar models, and compared to the much more discreet bullet-shaped bullet vibrators which, I feel, are a better bang for your buck). If you don't have rechargeable batteries, you will probably be making several stops to get more.

Bottom line: if you're new to the world of vibrators, or you need something to take on a trip, without lugging around your suitcase of expensive sex toys, get an egg. It's cute and shiny, at the very least.
This content is the opinion of the submitting contributor and is not endorsed by EdenFantasys.com