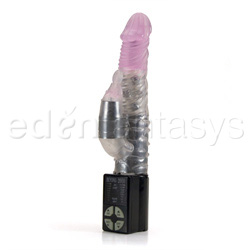 Overall I recommend this toy for a person who doesn't need an incredible amount of girth and likes a lot of vibration.
Pros:
Very powerful and multi-functional!
Cons:
Obnoxious box with no instructions; very loud.
Rating by reviewer:
3
useful review
If I could, I would give this toy (Beyond 2000 rabbit vibrator|Rabbit vibrators: Beyond 2000) three and a half stars. It functions very well, but the things it lacks are enough to not make it worthy of four.

Lets start off with the horrible packaging. The box is so much larger than it needs to be. It is the length and width of a shoe box and is an inch and a half tall. Considering I need to carry my packages across campus, the cumbersome box was not pleasant. The only reason the box is so big, is to have room for the tacky photos of an unrealistic heterosexual couple. They are embracing and not even using the toy.

When I tried it out later that night, I was pleasantly surprised!
Although the shaft is a bit smaller than I originally thought, it was extremely satisfying. The shaft and bullet both have eight settings. The shaft has a rotating center that feels absolutely incredible. The tip of the shaft pushes delightfully against the g-spot but it is not a g-spot stimulator|Vibrating g-spot sex toys. It teases which I find very satisfying. It isn't too much to be uncomfortable.

The shaft only increases slightly with each level but the bullet gets very powerful! I think the bullet is some kind of creature, but it is not realistic at all which is a big plus for me. At the highest settings it is very loud so be discrete with your options (if you have to be!). I assume you take a rag to this toy and be careful when cleaning as I don't know if it is waterproof or not.
This product was provided free of charge to the reviewer. This review is in compliance with the FTC guidelines.