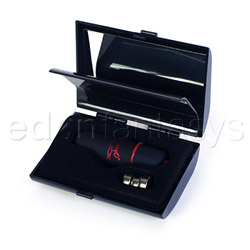 Big Vibrations (in a tiny package)

All in all, for the amount that you are paying for the vibe I think that it could be better, but it is a great little vibe otherwise. I think that another bullet vibe, such as the High Intensity Bullet, would be a better buy, either that or the Pico Bong Honi, both of which I have and use.
Pros:
Small, Powerful, Quiet, Discreet
Cons:
Battery Guzzler, Waterproof Gasket Comes Off Easily
Rating by reviewer:
2
extremely useful review

This little bullet vibe is great for clitoral stimulation. I absolutely love this little vibe with the exception of a few issues, but I will get to that later. It comes in a little case that looks very much like a make-up compact, and would be very inconspicuous if knot for the fact that it has Studio Collection By Screaming O on the top of the box in bright pink letters. Of course if you wanted this could be covered up with a large sticker of your choice. It has four different function settings, the first three of which are simply various strength settings, and the third is a pulsating setting. In regards to the first three settings though, there really is no difference in the strength of the vibrations and I see no point in them.

The material is a phthalates free plastic and is very easily cleaned. It is also free from latex, and has a smooth soft feel to it. I haven't noticed any odor from it, an it is fairly waterproof, although I would recommend that you be careful. The little gasket ring will come off very easily without warning, and is easy to lose. Other than that, you just clean it with a mild soap and warm water.

I love the size and shape of the bullet. I think that the idea of putting it in a compact is a great idea to make it that much more discreet, and travel friendly. Of course the writing on the top of the box is a little against how discreet it is, but at the same time, as I said earlier, it could be easily covered up with a large sticker. Meanwhile this is an extremely quiet vibe for the strength, and can hardly be heard when turned on full blast.

My first complaint for this product is that after on a little bit of usage it will turn off completely on its own. It will come back on once or twice, then shut off completely until the batteries have been changed or it has sat for a while. There is a reason that it comes with an extra set of batteries apparently. It is very aggravating to be in the middle of playing and it just shuts off. As for the controls, it has a single button on the end and this is the on/off and function change switch. One push turns it on and puts it on the lowest setting, the next push puts it on the medium setting, the third push puts it on the strongest setting, the fourth puts it on the pulsating setting, and then a fifth push turns it off. It is a very quiet little vibe and is very easy to use. It has very strong vibrations, but all of this is slightly outweighed by the fact that it guzzles batteries.

This little vibe is very easy to care for and keep clean, but the batteries could be difficult to find. Aside from them being watch batteries, I'm not sure on what specific size. The biggest problem with cleaning this vibe is that the little gasket (very small and pink) that makes it waterproof, will come off without much effort, and could be easily lost.
This product was provided free of charge to the reviewer. This review is in compliance with the FTC guidelines.