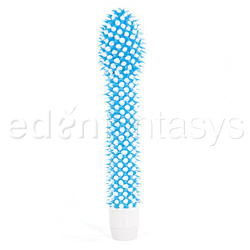 The Taffy Tickler Water Buddy was a real nightmare to keep clean with all the little nubs all over it. But it really could provide amazing feelings and sensations when i used it. But the core also didn't last very long at all.
Pros:
powerful
Cons:
nightmare of clean, didn't last very long
Rating by reviewer:
3
useful review
I know that it may seem a bit odd, but my husband gave me a vibrator on our first anniversary when we where only dating. But then again, I did kind of throw him into the whole sex positive even before we where dating. I kind of opened up his mind to a whole new world when we where just friends. But he is so happy to be a part of that world now.

The Taffy Tickler Water Buddy is made of TPR Silicone. It's covered in nubs and bumps that are actually very soft for as intimidating as it looks. Each of the nubs is very smooth to the touch. They are each glued on and they don't pop off at all. It's eight inches long with six and a half inches that is insertable. It has a diameter of one and five eighths at the max of the bulb head. It takes two AA batteries. There is a dial at the base of the vibe that controls the power. And this sucker is loud enough that I had to be careful when I used it in the house that I was living at the time. But that sound came with some very powerful vibrations. Just a reminder, if you are sharing sex toys, used a condom on them to help keep them clean and safe for everyone.

The Taffy Tickler Water Buddy was a powerful little bugger, but it didn't last for more than a year before the core burned out. It was also a nightmare to keep clean with all those little ticklers on it. I had to really get in there with my nails to get things out of the little cracks between them. A total bitch to do. But I did feel that it was worth it because it would provide really powerful orgasms.

I never picked up another one after mine died because it was such a nightmare to clean.
Follow-up commentary   I still don't like it 3 months after original review
My Taffy Tickler Water Buddy is long gone and long dead. I burned it out a while back and I managed to kill it very fast..... Don't know if I will get another one of them ever.
This content is the opinion of the submitting contributor and is not endorsed by EdenFantasys.com