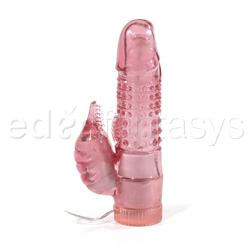 Bliss is an Understatement!

About the texture. The texture is even heavier than it appears on the picture. There are 7 bands of 9 3mm bumps on the shaft. In addition to those 63 bumps, at the base of the front of the toy is what Cal Exotic calls the "Orgasmic Love Button" which consists of about 30-40 bumps that are a little larger than the head of a pin, all concentrated into about a square inch area. I love, love, love texture at the base of my vagina, and the orgasmic love button more than lived up to its name. That feature alone would lead me to buy a toy. The rest of the bumps can be easily felt as well, and it feels great to slightly twist the toy from side to side.

Rather than strictly vibrating, the shaft of this toy also rotates. The rotation pattern is nice and slow, regardless of the strength of vibration. The clitoral part offers straight vibration, but the vibration is diffused through the two split ears and feels really nice. If you have a low g-spot, I would guess that the rotation would feel amazing, as the head of the shaft protrudes slightly during the rotation.

I gave this toy 4 stars instead of 5 because the construction of the Totally Blissful seems kind of low quality for its price point. The clitoral part is a TPR silicone-covered bullet, nothing remarkable. The main shaft consists of a plastic base with the inner workings attached and a TPR silicone coating glued onto it. I know it was glued on because the glue is sticking out/peeling off at the seam at the bottom of the toy (not near any part of the toy that is inserted). The TPR silicone coating gives the toy a kind of cloudy, translucent effect, which gives you a decent view of the inner workings of the toy. I'm not sure if this is standard-issue or not, but my toy has some debris that looks kind of like chewed gum floating around up near the head. It is kind of gross to look at, especially since chewed gum is really my best guess at what it could be. I finally decided that I'd just ignore it since it doesn't come into contact with my skin.

TPR silicone is a hybrid of silicone and rubber. My guess is that the compound is more rubber than silicone, as the toy had a strong rubber smell when I received it and it still has a heavy odor after a few washings. I licked the toy (you know, for scientific purposes) and it has a terrible chemical taste. I do not recommend putting it into your mouth, but I have found that if you do milk makes the taste go away.

Based on my experience, the material does melt in the heat (it was delivered to me on a 110 degree day, and some of the TPR around the base is kind of melted-- didn't affect performance at all). Condoms should be used if you plan to share this toy--it can be cleaned with soap and water/toy cleaner only and cannot be completely sterilized.

One more thing--you may not like this toy if you are easily distracted by noise. This toy sounded like what I imagine it sounds like when you're trapped inside an industrial-strength washing machine.
Experience
I have never used a rabbit vibe before, mainly because my clitoris is very high up and I believed I would have a hard time finding a rabbit with clit stimulation that could reach my anatomy. I was correct in that the clitoral ears on this toy did not reach my clit, but I enjoyed myself anyway.

Before inserting the toy for the first time, I turned the toy around and used the back of the clitoral ears to cradle my clit. This sensation was stronger and better than that produced by my Form 2, and I almost had an orgasm within about a minute of play. I wanted to play more before climaxing (once I have one, further orgasms come almost too easily), so I turned the toy off and inserted it. Even though I was pretty well-lubricated at that point, the toy's TPR coating has a lot of drag so I needed more lube than I usually use to get it all the way in.

After I finished, I put my Hitachi Magic Wand into the nightstand drawer for the first time in several months. I have a feeling it will stay there for a long time, as I have found a new favorite toy.
Follow-up commentary   I still like it 3 months after original review
I still really like this toy. The texture is amazing, and I really like the "Orgasmic Love Button".

That said, this toy is so hard to clean that I rarely use it. The TPR attracts every stray piece of lint, and it is very hard to get it completely clean. I dropped the Totally Blissful between my bed and the wall a few weeks ago, and I haven't used it since because even though I've washed it, used cleaning wipes, etc., every time I look at it I notice little pieces of fuzz, lint, or other debris.

I'd say the Totally Blissful is every bit as hard to clean as my jelly toys. I'd still recommend buying one, but if you do, you need to be careful to store it in a bag or find some other way to keep it as clean as possible.
This product was provided free of charge to the reviewer. This review is in compliance with the FTC guidelines.

My Totally blissful tags
About author