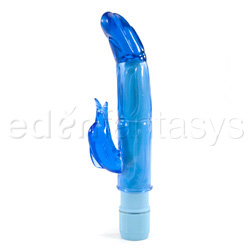 I didn't dislike the toy, but neither was I crazy about it. That is why I think this is more for someone not used to sex toys.
Pros:
Slim and effective.
Cons:
The clitoral dolphin itself doesn't vibrate.
Rating by reviewer:
2
useful review
I think that this toy would be a good beginner toy for someone who has never had a sex toy before. It would also be good for a younger, more inexperienced woman. The Aquarius dolphin is not so powerful so as to totally scare them away, and has enough of a strong vibration that it should easily bring them an orgasm. For someone more experienced in the toy department, it might not be as strong as they'd like. It is a very simple toy, and the vibrations go only slightly higher by turning the knob around. There are no other functions or special features, so it really is just a simple, slim vibrator.

The clitoral attachment, which is shaped like a dolphin, does not have a vibrating bullet inside it, so it does not vibrate at all. Therefore, it did not stimulate my clitoris that much. I felt it more inside and it was able to reach my g-spot. When I combined this toy with another one, it worked much better. I had the dolphin inside me, and another toy just pressed against my clitoris. I enjoyed this much more than just the dolphin toy alone.

I do not think that this toy would please the woman who likes a bigger vibrator inside of her. It is almost more of a teaser of a toy... one you could use to idly play with while doing something else, and then take out the big guns!!
Follow-up commentary   I still like it 27 days after original review
This toy has become one of my favorites. I keep it in a box on my bed, and combine it with clitoral stimulators. It always brings me to an orgasm.
This product was provided free of charge to the reviewer. This review is in compliance with the FTC guidelines.

My Aquarius dolphin tags
About author