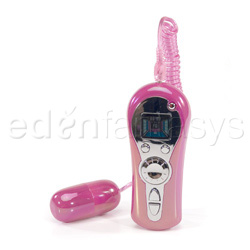 Placing it between both of us while we were in the missionary position gave us both the most amazing multiple orgasms. It is smooth and suitable for rubbing anywhere and everywhere.
Rating by reviewer:
5
useful review
When I was by myself, I started using the Boom Box Egg at about half speed, and I rubbed it over my clitoris. If you want to go from 0-60 right away, put it in full speed and get ready for a great time! This gentle rubbing sent chills up my inner thighs which became even more intense as I increased the speed and got more turned on. After a couple of minutes the sensations became more intense and regular, and ended in an amazing sensation, spreading from my clitoris to my thighs which made me arch my back and gasp for breath as I orgasmed. With my partner, he put the bullet vibrator over my clit and we had sex. The speed should be adjusted depending on how much you want to turn him on also.

Each time he thrusted, the sensation was heightened by the vibrations. Placing it between both of us while we were in the missionary position gave us both the most amazing multiple orgasms. It is smooth and suitable for rubbing anywhere and everywhere. It can be held against a penis, slipped between buttock cheeks to vibrate the anus, and slid over your nipples, not to mention placing it against your clitoris and in your vagina, and also your anus. It vibrates to a really thrilling effect. My boyfriend really enjoyed having the power to control what was going on. The whole idea added to the initial excitement and arousal. When he kept the button turned down low, it was enough to take my breath away. Individually buzzing it every now and then was enough to keep me on my toes. The novelty value is great and it certainly makes playing around a whole lot more fun. At one point I was spread out on the bed.