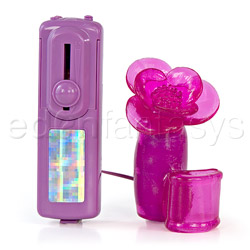 I think this toy is definitely worth having in one's collection. The soft petals fluttering across the skin give a unique sensation that I have not found in any other toys.
Pros:
Small, easy to store.
Cons:
Became very noisy after a while.
Rating by reviewer:
3
useful review
The Blossom would be suitable for anyone to use, singles, couples, experienced users as well as those just starting in the use of toys. It is great to use during foreplay for stimulating and teasing the clitoris, penis, testicles, and nipples. It can be used to draw over just about any part of the body that you wish to use it on such as stomach, inner thighs, neck, and back. I found that it was very interesting when my partner turned the toy around so that the back of the sleeve where the bullet is located was on my clitoris, the blossom part was facing away from my body, but it was held a little downward so the petals stimulated my vaginal opening.

The blossom itself is 2" in diameter. It has small, soft, flexible nubs on the center of the blossom and 6 soft petals that surround the center. The blossom is attached to a sleeve that is also soft and flexible that is 2 1/4" long and 1 1/4" in diameter. Attached to the sleeve is a stretchy loop to put your finger/fingers in that is 1 1/4" long and 1 1/4" in diameter. I could get two of my fingers in the loop comfortably but my partner found that it was too small for two of his fingers but too big for one. The blossom is made of 100% Elastomer and is phthalate free, you can use a water based or silicone lubricant with it. You cannot disinfect it with boiling water, but you can use soap and a gentle soap as well as a toy cleaner.

The removable bullet is made of hard plastic and is not waterproof. It could be used alone but I would recommend using a condom with the bullet if you use it by itself as it has an uncomfortable line around it where they glued the two halves together during manufacturing. Using a condom makes that line unnoticeable. I also recommend a condom if you are using the bullet by itself and you are sharing it. It can be cleaned with a washcloth and soap and water, toy cleaner, or a 10% bleach solution as long as you are careful not to get any moisture inside of the bullet or the control unit

The bullet is attached to the slider control unit, which is also made of hard plastic, with an 18" long wire and uses 2 AA batteries. The battery compartment is easy to access with a sliding cover, but the cover can come open if you put pressure on it when you are using it. The slide control allows the vibrations to be adjusted from a mild vibration intensity much like a cell phone to a moderate intensity that you can feel easily but isn‘t going to rattle the windows. When I first started using the Blossom, it was fairly quiet, it could be heard through blankets and a closed door, but after a month of use it developed a loud rattle when set on the highest setting that I found to be a bit distracting and it could be heard in adjacent rooms. It sounded like the motor inside the bullet was rattling against the plastic housing.

The Blossom has no smell or taste to it. It comes in a clear plastic box that the toy could be stored in. the box could be easily gift wrapped. Since the toy is relatively small you could pack it in your purse or luggage for travel.
This content is the opinion of the submitting contributor and is not endorsed by EdenFantasys.com

My Blossom tags
About author