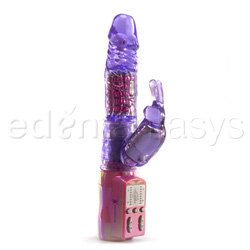 But will it answer your e-mail?

The idea is definitely an exciting one, and the technology is certainly there. But even an impersonal fuck from a long distance stranger should have something more than an illicit thrill going for it, and this bunny just doesn't have what it takes.
Pros:
Like my friend says, if you're long distance and lonely, then maybe it works
Cons:
Ugly, awkward, noisy and not built for comfort either.
Rating by reviewer:
2
extremely useful review
Okay, I’ll admit straight away that computers have come on a long way since the old days of staring at manuals for weeks, wondering whether you should have taken that course in pidgin-English after all; when new toys and devices were less “plug and play” and more “plug and fuck around for three days.”

But the time and energy that it took to get this thing up and running... not to mention the conscience-wrestling dilemma of wondering whether you really want to give your credit card details to a company who know exactly what you’re spending your money on.... Well, let’s just say you have to really want to try it out, if you’re going to go through all that.

A friend whose “partner” is someone she knows only through Second Life (and I’ll say no more than that) tells me her Internet Rabbit has improved her sex life beyond all recognition, and that now they’re searching around for a similarly operated Fleshlight for him.

Me... I made sure my boyfriend was in clear view the whole time the thing was plugged in, which is probably very boring of me, but it also meant I could see what he did to... well, to make it respond.

It’s loud, which the manufacturers own blurb admits, but to be honest even with a warning on hand, it surprised me just how much noise the thing made. There is also a lot of difference between the programmed variations, which makes it difficult to find the rhythm that feels right. And when the operator is a hamfisted dolt who doesn’t seem to be able to tell the difference between a rabbit and his favorite race game, it’s very easy to wind up feeling like your pussy’s just been pressganged in to an especially violent game of Tetris. Either that, or a human Rubik’s Cube.

A bumper pack of cock rings, I think.
This content is the opinion of the submitting contributor and is not endorsed by EdenFantasys.com