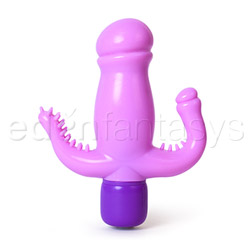 Butt Lover With a Limp Limb

The Butt Tite Delight is a strange-looking toy that looks impressive and leaves one wondering how the toy performs. It's understandable as it really looks like a tentacled alien gone terribly wrong. With a toy with such an original shape, size and use, you have to be ready to try something different to break away from what you know of sex toys. First of all, you have to be aware that the shaft is fairly large to begin with, and if you have never tried any sort of double penetration, you should figure out in advance if you can handle a shaft of 1 3/4" and a probe of 1/2" at the same time. Yes, it's going to be TIGHT. Since the shaft is large, it compensates for the size of the probe so that it will feel larger than it actually is.

The central part is meant for insertion, the tentacle part is meant to tease the clitoris -but not so much-, and the probe part is the one meant to be inserted anally. If you get this toy, you have to be ready to go all the way with it, or else, you probably won't appreciate it half as much as it deserves (more in the performance section), but even then, the toy could use a little bit of tweaking and improving.

It is hard to tell who would enjoy this toy more, as everyone would be disappointed by the useless nubbed attachment. But if we put that aside and think only of the shaft and the probe, the toy is actually interesting and I could easily recommend it to women who want to be gently introduced to double penetration. For that purpose, it is actually a positive thing that the vibrations aren't that pronounced as you can focus more on the penetration itself. Yes, sometimes less is more - except for the clitoral part.

After opening the plastic shell and noticing how much it smelled like plastic, I was really happy to know that the material was made of a food-grade PVC, which is also hypoallergenic, latex and phthalates free. The smell can be perceived 2" away from the surface of the toy and will even remain on your hands after handling it. Washing your hands will instantly remove the smell, but I hope that lingering smell is going to fade away with time. I did not bother in tasting the toy though.

The texture is minimal and most of it consists of nubs on the clitoral part and at the base of the probe. Overall, I could only perceive the nubs at the very tip of the clitoral attachment, and I do not think I could insert the toy so far as to feel the other nubs, especially not the four ones on the side of the probe. As for the shape of the shaft, I could feel the neck and the widening of the shaft, and I was a little worried that the toy might slide out on its own, but it didn't.

You can use water-based and silicone-based lubricants with this toy.

However, like I said before, the motor isn't placed in an optimal position to assure that some type of vibrations would be felt through the nubbed clitoral attachment. It just comes in contact with the clitoral area and does nothing else. If it were up to me, I'd just redesign this toy without that part and it would instantly improve the whole toy.

This "thing" is definitely not discreet, and if visitors were to see it, they'd know how much of a naughty girl you are.

The first thing to know with this toy is that there the single motor is located at the very tip of the shaft. As a result, very little vibrations travel to both the lateral parts of the toy. For me, the only way this toy could give me an orgasm is to place the tip directly on my clit. The first time I tried this toy, I only inserted the shaft and realized that I could not feel the lateral parts vibrate. If they did, it was so minimal that I didn't get any stimulation.

The toy has 10 settings, and while some are the usual constant vibration settings, some are very interesting and unique. There is also a sort of vibration guide at the back of the package that represents the patterns of the toy. With a quick glance you can understand what the settings will be like; this is a great visual aid that should definitely be used by other companies. The following pattern names are the one given on the package:
1. Low vibration
2. Medium vibration
3. High vibration
4. Pulsate
5. Surge
6. Inta-Surge
7. Intermittent
8. Escalate Step
9. Roller Coaster Spurt
10. Gradient Burst 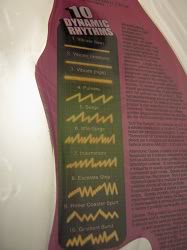 The toy functions with 3 AAA batteries (not included) and is turned on with a push button at the tip of the battery cap. You have to cycle through all the vibrations to turn it off. The toy is waterproof enough to be washed under running water or brought in the shower, but is not guaranteed to survive a bath or a dive in the pool.

As the toy collects more lint than 5 silicone toys together, I recommend storing it in a Ziploc bag or even using the plastic shell it came with.

The material is somewhat porous - read that it cannot be sanitized - and should not be shared, especially since a condom would not fit over such a peculiar toy.

There is a sort of vibration guide at the back of the package that represents the patterns of the toy. With a quick glance you can understand what the settings will be like; this is a great visual aid that should definitely be used by other companies.

How I rated the toy:

However, it might deserve a 3 if you intend to buy this toy to be initiated to double penetration. Since the shaft is large, the probe - even small - will be clearly felt without stretching the sphincter much, which is a very good thing. But even then, since the clitoral part still does not vibrate, I had a hard time justifying a 4.

Also, even if I gave the toy a Vroom of 3, when it is inserted, the vibrations are dimmed and feels more like 2 in the shaft.

I have to admit that it was the toy's odd shape that made me want to try it, and even if it did not perform to perfection, I really had fun trying to make it work. My boyfriend was excited to watch me try such a naughty toy, and I do not feel like I wasted my time.

My lesson learned is that the fun to be had isn't always related to having the perfect experience. I mean no offense, but I had fun with it as a type of gag toy and we had a great time too - even if it meant laughing at the toy. Why not?
Follow-up commentary   I still don't like it 12 months after original review
I noticed that Edenfantasys is no longer carrying this toy, and I'm really happy to see that our reviews do make a difference. A random negative review is normal, but when the majority of the reviews are negative, then something is definitely wrong.

As I said before, that type of design can work, but it has to be supported with a good material, shape, and power. It's hard to do when trying to create a cheaper version.

As you can expect, I've never use that toy anymore, as it was sent rather quickly to the garbage bin... and I'm a type of reviewer that does not easily part with any of my toys.
This product was provided free of charge to the reviewer. This review is in compliance with the FTC guidelines.