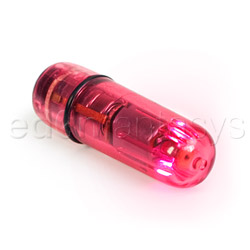 Screaming O's glow bullets are a great idea with unfortunately poor execution. Despite the fun the light adds to playing in the dark, no gimmick could make up for the lack of strong, deep vibrations most women need.
Pros:
Waterproof, light is a cool idea, comes with batteries
Cons:
Vibrations are clit-numbingly buzzy!
Rating by reviewer:
1
useful review
Screaming O's Glow Bullet is a standard-size bullet (meaning it will fit most dildos made to hold bullets, Tantus included) that can be used almost anywhere on the body, as long as you're not too ticklish. Though I enjoy the toy a a teaser on sensitive areas like nipples and inner thighs, I found it pretty much useless as a clitoral stimulator. There are some people who don't mind buzzy, high-pitched vibrations, but I am not one of them.

The bullet comes complete with two LED lights at the end, which add a fun show to play in the dark. The light is dim, but just bright enough to illuminate the body parts it's touching. It is made of hard, smooth plastic that feels thick and solid. Because the bullet is waterproof, it can be cleaned in the sink with gentle soap and water, or wiped off after use with baby wipes.

The Glow Bullet comes with batteries, and doesn't eat them up too bad (I have only used it 6-7 times in the month I've had it, but it runs just as well as ever). It has a single, steady vibration setting that is moderately strong.

In use, the Glow Bullet numbs both my fingers and clit within just a couple minutes. Though the light is fun and it feels solidly constructed, it just doesn't have the rumble or strength to get me off. I was able to come using it once, but it required a lot of concentration and mental stimulation - much more than usual, even with similarly cheap bullets.
Follow-up commentary   I still don't like it 7 months after original review
I threw this bullet away after just a couple uses. It just did not have the vroom to get me off.
This product was provided free of charge to the reviewer. This review is in compliance with the FTC guidelines.