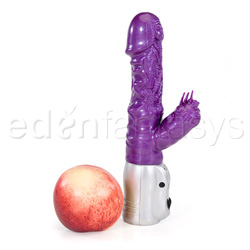 By far my favorite sex toy

There aren't many cons to mention with this fantastic vibrator, but there are a couple. First, the highly textured shaft (with the sarcophagus design) traps fluids like no toy I've ever used. But with some soap and water and a few minutes, the squishy crevices can easily be cleaned up. Or, to avoid the mess entirely, just cover with a condom--the surface is textured enough that a condom doesn't dull sensation very much at all. The second drawback, which is also minor, is the battery cover. It doesn't come off all the way, just doesn't fit tightly enough, so it rattles a little bit with the vibrations. Finally, the noise is a little loud, especially when the shaft is rotating, but as another reviewer said, you really won't care about the noise when it's on all the way.