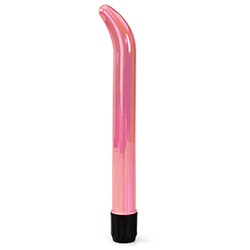 Even though it's designed for the G-spot, the Candy is good for clitoral stimulation and for the rest of your body. I had much more success using it that way than on my G-spot-the narrow tip is an effective way to target the clitoris.
Rating by reviewer:
3
useful review
I was very excited when the package containing my new Candy G-spot Vibe arrived. I had never used a G-spot vibrator before. The Candy is very attractive and simple; plastic, about seven inches long, with a multi-speed vibrations. It’s both smooth and narrow, so using a condom with the toy is a bit awkward, but if you opt not to use one, it’s very easy to clean.

The range of vibrations is enjoyable, but unfortunately the sensations are strongest in the shaft of the toy, not the tip, which is a bit of a problem when you want to stimulate your G-spot. I had to turn the vibe all the way up in order to really feel anything inside. And because the toy is slick and narrow, it was easy to accidentally shift the toy so that it was no longer on my G-spot (especially because the tip is so narrow to begin with and the vibrations at that end aren’t very strong). Actually, rotating and shifting the toy around while it was inside was very pleasurable. It just doesn’t do much for the G-spot.

Even though it’s designed for the G-spot, the Candy is good for clitoral stimulation and for the rest of your body. I had much more success using it that way than on my G-spot—the narrow tip is an effective way to target the clitoris.

My favorite part of this toy is that it’s waterproof. When I saw that on the package, I immediately loaded it up and jumped in the shower with it. That option makes this toy much more versatile, and in part, makes up for some of the other problems I had with it.

Overall, the Candy G-spot Vibe wasn’t earthshaking, but it wasn’t bad, either. It’s better suited to those who are experienced with their G-spots—know where they are and how best to target them. Beginners will probably not have much luck with the G-spot. I was disappointed with it as a G-spot toy, but enjoyed using it elsewhere as a vibe.
This product was provided free of charge to the reviewer. This review is in compliance with the FTC guidelines.