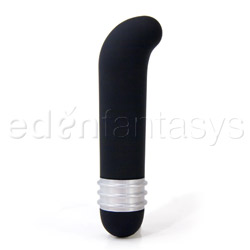 It's just got no power.
The charisma uses only a single double A battery and that just doesn't seem to give it enough "oomph."

It felt good. Pleasant. Arousing.
But it did not - could not - bring me to orgasm.

Every time I tried it I had to replace it with an old stand by in order to actually get off. It was frustrating, to say the least.

Perhaps others would have better luck with it. I tend to need more powerful, throbbing vibrations and the Charisma delivers little more than a mild buzz. It left me vaguely numb and thoroughly aggravated.

The toy is very simple to clean with soap and water and, because it's plastic, it isn't porous.
Follow-up commentary 7 months after original review
I've come to the conclusion that one battery toys just aren't "enough" for me. I really wanted to like this toy. I really, really wanted something small and quiet enough I could keep it in my desk and sneak a wank without waking the family or alerting the neighbors. And despite the product description, this toy is really very quiet.

I absolutely love the velvety coating and the fact that the Charisma is so easy to clean. Toy cleaner or wipes or soap and water gets it clean in short order.

But there just isn't enough power. I've only been successful in orgasming once with this thing and that required a whole lot of rapid movement against my clitoris on my part. I really can't feel it at all against my g-spot.

The battery lasts a good long time, though, so I'm really hoping that for those who are sensitive or don't require a lot of vibration this toy is the winner it could be.
This product was provided free of charge to the reviewer. This review is in compliance with the FTC guidelines.