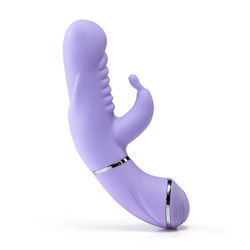 A well rounded rabbit, this toy is sure to charm you. It features multiple vibration speeds and settings and boasts a fairly impressive battery life. Some may find the arm a bit on the pointy side, but it has enough girth and detail to satisfy a wide range of toy enthusiasts.
Pros:
Strong vibrations, great battery life, low smell, not intimidating, multiple speeds/settings
Cons:
Overly pointy arm, more water resistant than water proof, some might not like using batteries
Rating by reviewer:
4
extremely useful review

This charming rabbit is intended most basically as a vaginal toy with a clitoral attachment. However, if you prefer not to let labels get in the way, there really are a number of ways you can use this, or any other toy.

One could start with the simple intended purpose, or switch things up a bit; either flipping the the Charm rabbit to tickle the outside of the anal cavity, or going all out and using the main body of the the Charm rabbit anally and tickling the vaginal entryway. Don't want to venture to the back door? Use the main body of the Charm rabbit on the clitoris and let the extra arm wave at you while you go to town! If you're not in the mood for thrusting, insert it fully and flip through the various settings to find one that works for you.

The materials on the Charm rabbit are listed as silicone and ABS plastic. The base has a very smooth feel under the fingers, with its velvety plastic, but also enough grip to keep it from slipping out of your hands willy-nilly. The silicone of the body has more grip and texture to it. You'll want to make sure that wherever you're sticking it is properly lubricated because it won't just slide in on its own, but it's surprisingly not much of a lint trap. Like most things with that texture, it will pick up some dust, but it won't keep half the towel when you try to dry it off.

It did have a scent fresh out of the box that reminded me a lot of just something being new. Washing it took care of that for the most part, although it did pick up the scent of the soap that I used. Flavored lubes or other heavily scented things will likely stick with the material for a time as well.

Overall the Charm rabbit has a fairly petite appearance. Those who tend to enjoy things on the extremely girthy or long side may be disappointed, and those who prefer their toys on the thin side may want to look elsewhere, but for most people it should do the job just fine. Overall end to end length is about 6 1/2", with the insertible portion measuring just over 3" in length and about 4" around.

The insertible portion features a number of ridges that end just before the arm that extends out to tickle the clitoris. The ridges can be felt in the form of extra texture while thrusting, but aren't overwhelming and will provide good stimulation to the g-spot if it's reached. The base of the arm is thick and sturdy, tapering off into a rounded point with a few ears on it. The handle is sized well enough that even the smallest of hands should have no trouble controlling everything one handed, but things may prove a little trickier if your hands are sized closer to say, Andre the Giant's.

Discreet is not the first word that would come to mind to describe the Charm rabbit. In general, it really does look like a sex toy with its phallic shape and rabbit like arm. That being said, it isn't overtly sexual or even all that graphic.

Vibrations on the Charm rabbit seem to come from just about everywhere. They're spread evenly down the shaft, as well as into the rabbit arm. They can be felt while you're holding the base, but they aren't enough to make your fingers get all numb or tingly after a while unless you're actually holding either of the shafts. The vibrations themselves are strong and a little on the buzzy side, although surprisingly deep and powerful. They're also surprisingly quiet. If you're using this behind a closed door and under the covers you shouldn't have to worry about anybody hearing you at all. If it happens to be on in the same room as someone, they'll probably figure it out.

You have the option of running through a total of 10 different vibration patterns; high, medium, low, gradient burst, intermittent, surge, insta-surge, even step, roller coaster spurt, or pulsate. A few of them are fairly self explanatory, but all of them have a visual representation on the side of the box so you can get an idea of what to expect.

After you've twisted off the base to insert your 2 AAA batteries, you can control the vibration settings by pressing a single large button on the bottom of the Venture. It has a handy light up ring so you know for sure it's on. Each press of the button will bring you a new vibration setting, and it can be turned off simply by pressing and holding the same button. When you turn it back on again, it resumes where it was rather than having to cycle back through all of the settings every time. The only downside is that it does seem to be a bit touchy, accidentally turning on when being cleaned and when I was trying to put it away.

The back of the box also states that you shouldn't use this when bathing or in the shower. Keeping water out of the battery compartment doesn't appear to be the main concern based on the construction of the toy, but the on/off button dry and safe may be trickier. You may be safe in the shower if you keep it out of the stream of water, but I would say that you should just find a different more water loving toy for the shower.

For those of you curious about battery life, you'll probably be fairly impressed. It ran for a good half hour or so during use, and then sat for another 40 minutes on high. Even after all that, the pitch changed noises but the vibrations didn't seem to be any weaker.

The Charm rabbit requires slightly more care than a basic long bullet vibe, but still isn't overly complicated. The tricky part is making sure the ridges are clean and don't hold on to any lube or bodily fluids. Because of that I definitely recommend actually washing with soap and water as opposed to something more simple like a toy wipe. You'll want to make sure you get all the nooks and crannies clean. You don't need to take extreme care to keep the seam at the battery compartment dry, but you will want to avoid the power button while also taking care to not accidentally turn it on, which happened a few times when I would clean this.

Because it isn't overly large, you can store it in a number of places. The box would probably fit pretty decently in a number of drawers, or you could keep it in a toy bag, or even wrap it in an old T-shirt. I would recommend removing the batteries before storage for a few reasons; keeping them from corroding inside your toy, and keeping them from draining if it accidentally gets bumped on.

Because the Charm rabbit is coated with silicone, your safest lube option is something water-based. If your preferred lube is silicone or oil-based, you can do a small patch test somewhere first to make sure that there won't be any damage or interactions.

Overall the packaging was pretty decent. The box it came in wasn't excessively large or overly tacky, although it certainly wasn't discreet by any means. The toy itself is prominently on display through a large clear window, along with descriptions of it and its functions around a few of the edges. The side features a diagram of the various vibration settings, and the back has the standard list of warnings, materials, batteries, etc in 6 different languages. When you open it up, you'll find the Charm rabbit in a plastic tray, and instructions nestled into the top of the box. The instructions are basic, but helpful in letting you know how many of what batteries you need and how to get them into the toy.

Just a few things of note that I found:

The product page lists this as waterproof, but the packaging begs to differ. I really would use your best discretion here, but err on the side of not submerging it.

The product page also has this listed as "Charm Rabbit," where the packaging that I have names it the Venture X. Near as I can tell, it's the same thing with a different label.

Overall I was pleasantly surprised by how much I ended up liking this. Rabbits have long been a wild hit or miss with me, usually through no fault of their own. I would put this one solidly in the 'hit' category and recommend it as a safe choice for most people. The changing vibrations gave me the different sensations I usually need to finish without having to thrust, which was really nice because to me the end of the arm was almost painfully pointy. It wasn't a big deal in the beginning, but towards the end it became a real distraction for me. The rest of the shaft was great though; filling but not pronounced enough at the head to catch on the pubic bone.
This product was provided free of charge to the reviewer. This review is in compliance with the FTC guidelines.