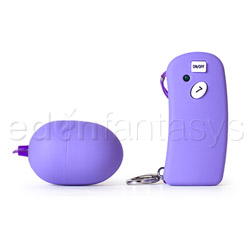 Cleopatra Should STAY in her Tomb

Warning: This is a scathing review. If I could give this item less than one star, I would.

The Dr. Laura Berman Intimate Basics Cleopatra by California Exotics is a remote control egg stimulator. Remote control toys of this style are intended to be inserted vaginally and worn about while the user or the user's partner covertly presses the buttons on the control, cycling through the various patterns for some secretive fun. Unfortunately, this toy doesn't function well in the realm of privacy due to its noise level. While it can also be used externally to stimulate the clitoris, there are other toys that are much more reliable, significantly more powerful, and far less noisy than this one. Since it inserts fully into the body, I would not recommend it for anal play unless you'd like to go fishing for the end of the retrieval loop when it gets lost inside of you...

Although remote control toys are often directed at partnered play and the size of this item is suited to beginners as well as advanced users, I cannot recommend it to anyone with a clear conscience. Pretty much everything that could go wrong with this toy...did indeed go wrong. If I were Dr. Berman, I would be downright embarrassed to have my name and image ascribed to this useless piece of junk.

Both the remote and the egg are made of a hard, matte, lilac-colored Plastic with a PU coating. Although it is smooth and velvety, the egg's blunt tip requires lubrication to ease insertion. There is no taste, but if you put the items right up to your nose, there is a faint smell from the plastic.

The retrieval cord on the egg is made of thin metal wire covered in pliable, translucent purple plastic. If you bend it, it will hold its shape. The belt-loop or key-ring attachment on the remote is made of the same material, ending in a small metal clip that is fairly tricky to actually get around a belt-loop because of its size and design.

The egg itself is just under 1.5" in diameter and is 2" long from base to tip, with a protruding quarter inch of plastic that holds the retrieval loop onto the body of the toy. The loop is about 5" long and less than 1mm thick. It is fairly comfortable and unnoticeable when wearing the egg. Unfortunately, it also turned out to not be very sturdy. After using the egg a few times, one side of the loop pulled free from the base when I was removing the toy. Thankfully, the other end of the cord had remained firmly attached thus far and, if the toy had continued working longer, I had planned to trim the now 10" long cord to a more manageable length.

The shape of the egg is more blunt than a regular chicken egg, without the more pointed, tapered end. I feel that this would have been a nice addition to the toy, for easier insertion, especially since I imagine this toy being inserted before one is aroused. What I mean is that my personal fantasy would be to insert this item before a night on the town and have the control in the hands of a partner, teasing me to a frenzy all night long. I would not necessarily be aroused and excessively lubricated beforehand. Having a more tapered shape would also allow this egg to be a little bit larger and more noticeable when wearing it around. I was surprised at its diminutive size. It is small enough that it is often difficult to feel. There is a noticeable seam around the center of the egg, which is where it opens to insert the required 6 watch batteries. It does not close tightly. No matter how many times I tried, there are still gaps in this seam. You do not feel the seem while inserting the egg, but it is messy to clean up afterwards and makes this supposedly waterproof toy less so.

The remote control is fairly discreet, since it is not labeled as a vibrator control in anyway. Personally, though...I play most often with male partners and lilac is not the most masculine color, which may cause people to look more closely at it than if it were black or silver. It is quite small at 1.25x2.75x0.75" and is curved slightly to the left, which makes it comfortable to hold if you are right-handed. If you're left-handed, the corner of the control presses into your palm when you operate the buttons. The buttons are labeled "on/off" and "7". The on/off button is pretty self-explanatory, but the seven is used to cycle through the toy's seven vibration patterns. The buttons are placed so that one's thumb can bend to reach either of them when it is hidden in the palm, with some effort. It would have been far more convenient to have the buttons aligned along the top of the control for optimal ease and discretion. The lengthy (4") belt-loop/key-ring cord makes it less discreet than it would have been without that feature, as it is long enough that it dangles from my palm, even if I try to keep it hidden. There is also a small green bulb on the front that tells the user that the toy is on and vibrating.

The overall aesthetic of this toy is rather cheap and cheesy. It doesn't look sturdy or high quality and, in fact, it's not.

When you first turn the toy on it gives a little extra burst of power and then fades to its usual moderate strength. Its vibrations are numbing and barely noticeable after a few moments of wearing it. The only really effective method of use is to turn it off for a while and then turn it back on suddenly, giving your partner a little jolt. Other than that, it becomes monotonous and only noticeable for a few moments after the pattern changes and there's that initial surge of power.

There are seven functions, which are as follows:

The vibrations are LOUD. Loud and rattly and obnoxious. Any other discretion this toy might have had going for it is lost the moment you turn it on. Even if it is inside of you, it is still audible above quiet background music and chatter, as you might have in a nice restaurant. It might be applicable if you were wearing it out clubbing or somewhere that it would be quite loud so as to drown it out. If you were planning to just wear this egg nestled up against your clitoris, beneath your panties, forget it. You'll be getting some REALLY funny looks from perfect strangers.

It seems to have a range of about five-eight feet, despite its claim of FIFTEEN feet, which is pretty unfortunate. You need to be very near your partner in order to have it work. It doesn't even work from across the "bedroom" in my small studio apartment...

The egg has a rubber ring around the cap and is intended to be waterproof, since it's meant to be fully inserted in the vagina. Unfortunately, because of the poorly aligned ridges that the cap screws back onto, the gaps in the battery compartment keep this toy from being completely waterproof. Also, take care not to get the remote control wet as it is not even pretending to be waterproof.

Bear in mind, if one component of this toy (either the egg or the remote) has weak or dead batteries or is malfunctioning for some other reason...the whole thing is useless. The remote portion eats through batteries even when the toy is not turned on. Why should I have to remove the batteries when I'm not using it for a few days? What a pain! Unfortunately, it also doesn't take AAs or AAAs, which most people have on hand in their homes. Instead, it takes one 12 volt battery and 6 watch batteries. It comes with two sets of the required batteries, which is one of the few positives of this product.

The egg vibrator can be pretty messy after you remove it from inside of your body, so be sure to rinse it off and wash with soap and water or wipe it down with toy cleaner and wipes. I was storing mine in a small drawstring bag that I had on hand, but since it's plastic it should be safe to store freely among other toys or in your bedside table or just about anywhere else. The belt-loop/key-ring clip can be clipped onto the egg's loop so that they don't get separated. If you haven't broken the loop, that is.

The box recommends using water-based lubricant, but silicone should be compatible as well.

The packaging for this toy infuriates me. It it very small (about 2-3" long, if you recall) and it comes in a comparably enormous box, measuring 4x8.5x2". Seriously. It's huge! And inside the box, the egg and remote and batteries are wrapped in individual plastic bags. SO excessive! The box could be used for storage, I suppose, but why bother? It's a huge purple box and it has pictures of the product on both the back and front, making it completely indiscreet. Please be sure to recycle!

No instructions are included beyond the fine print on the box, which reads "Wash before and after each use. Remove batteries when not in use. Always use a water based lubricant with this product for maximum pleasure."

I am an aspiring sexuality educator and sex therapist. Despite my personal feelings about hokey "sexperts" such as Dr. Laura Berman and Dr. Phil, I was as objective as could be when reviewing this item. The fact of the matter is that after less than two weeks of gentle, intermittent use...The Cleopatra is no longer functioning, despite inserting fresh batteries in both components. It is a piece of junk, plain and simple. (As are the other items in Dr. Laura Berman's line of toys. We carry them at work and they are all equally awful...) I hope I never find myself sinking to plastering my name on ineffective, poor quality products just to earn a buck. I will be sending this toy off for recycling soon, in a box with a few other broken and ineffective items...


You can visit my blog to see a video demonstrating my various complaints about this product, including just how loud it really is.

I have yet to find a remote control egg that is actually effective for what I'd like to use it for. A number of the other ones available on EF are of the exact same design and style as this one, but with different names. Be careful! For me...The search continues.

7 function wireless remote egg
$49.99
Follow-up commentary   I still don't like it 6 months after original review
This toy was toast after just one or two uses. It never turned on again. Honestly, that may be a blessing in disguise, since this toy was such a disappointment to begin with. I recently donated it to a friend who will be hot gluing it to a headpiece covered with other broken and discarded sex toys for a fun costume. I think it's better suited to that role than the one it was intended for.
This product was provided free of charge to the reviewer. This review is in compliance with the FTC guidelines.