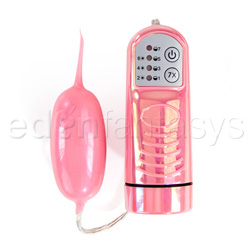 The first of the 7 cycles is nice easy vibrations, the second provides nice steady pulsations. Both of these settings were great for getting started. As we moved into what I thought would be more intense versions of these settings, what I found were random patterns of pulsing and vibrating. This is where the frustrations set in. I like a lot of intensity, and this just didn’t provide it for me. Just when things were starting to heat up, it would move into another function, or pause for a moment. It became very distracting and never got me where I wanted to be.

I am never willing to give up on something after one try, so later that week I tried using it in the tub. The climax flicker is supposed to be water proof as long as the O ring is in place, so I made sure it was secure and settled in for some “me” time. Again, I was happy with settings 1 and 2, but not so happy with the other random settings. I tried inserting it into my pussy and topping it off with another vibrator. This was working pretty nicely, until I noticed that the egg had stopped pulsing. The lights were blinking, but nothing was happening. I opened the controls to check the batteries, and found it was full of water. It was definitely not waterproof.

Overall, I was very disappointed in the Climax Flicker. It has some positives (long cord, quiet sound, and the flickering tail for initial tickling). This could be a good toy for a beginner or someone that is looking for a way to introduce a non-intimidating toy to a relationship. Just keep it out of the water. For me, I just need something more.
This product was provided free of charge to the reviewer. This review is in compliance with the FTC guidelines.