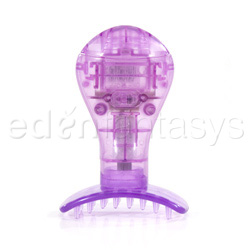 So overall, I would say that this toy is quite convenient, but not necessarily the god of all playthings. It isn't bigger than the palm of your hand, it's not horribly ugly (maybe a little funky looking).
Rating by reviewer:
4
useful review
When I first opened this package, I was surprised; the size and shape were so much different than I had expected. It was not a disappointment, though. This toy may be small, but it sure can pack a punch. So, let's start with my review.

It has a nice curve to the spiked end that makes it easy to cup the erogenous zones and lightly massage them. It has one speed setting, which is actually quite powerful coming from such a small toy.

So, I decided to try it out at first when I was alone. Pretty simple; I just set it in place, maybe moved it around a little bit - not a bad foreplay toy, and it actually got me off (pardon the pun) to a pretty good start. However, I found it pretty hard to use this for the sole purpose of orgasm. It had started the job, but refused to finish; so I brought in reinforcements. Namely, a bullet and my girlfriend. Before I finished, I decided to try it on her, see if I could use it in any different ways:

It worked great when you just caressed it against almost any area; nipples, breasts, stomach, clit, anus, whatever! It's not a tickling sensation, so it's not uncomfortable to feel the jelly spikes on you.

When you're playing with a little bit of light bondage, this toy is great for teasing (we found that it worked especially well when you're trying to heighten/hold off an orgasm).

So the toy itself isn't horrible, it's actually quite fun - and really portable. It isn't bigger than the palm of your hand, it's not horribly ugly (maybe a little funky looking). So overall, I would say that this toy is quite convenient, but not necessarily the god of all playthings.
Follow-up commentary 3 months after original review
This has been sitting in my toybox ever since I reviewed it. If I could change things, I would have given this a two out of five. Hell, a two out of ten.

The vibrations are poor, and are just not worth the money.
This product was provided free of charge to the reviewer. This review is in compliance with the FTC guidelines.

Reviewed by Nicole (Eden Reviewer) It's just human. We all have the jungle inside of us.
Rank
5.1
wrote 9 reviews
Comments
Make a post
Forum
No discussions yet.
Thank you for viewing Jelly mini-teaser – massager review page!
Top