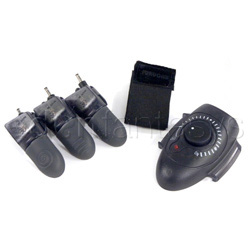 If you're looking for a unique toy which can be used for teasing/tickle-torture, this toy is ideal. There's nothing quite like having something attached to the fine control of your fingers. But as a stand-alone toy, the Fukuoku cannot deliver the more powerful, deep vibrations which are usually associated with reliable orgasm-machines.
Pros:
-Unique design
-Turns your fingers into stingers
-Relatively compact
Cons:
-High-frequency vibrations aren't for everyone
-Weak vibrations
-Not well-calibrated
Rating by reviewer:
3
extremely useful review
As an amusing opening note, one cannot help feeling chagrined at the fact that this toy's name is obviously Japanese; however, the rather shameless box art features a very American woman on the front, and the toy sports an ironic "Made in China" label on the back.

The Fukuoku Power Pack includes the power box; a self-contained unit about the size of a credit card with the depth of a little more than half an inch (imagine your typical tin of Altoids). The power box houses three AAA batteries. This unit attaches to the wrist via a wide, fairly comfortable, elastic band secured by velcro. Given the elastic nature of this band, a wide variety of wrist sizes can be accommodated (even those with tiny wrists should be able to achieve a snug fit). Defining the superior aspect of the power box is an all-encompassing knob which serves as both the power switch and intensity gauge for the included vibrators. The Knob is sturdy and set deep into the unit, so issues associated with the wear of flimsier knobs will not be a problem here. A small light below the knob will alert the user when the unit is turned on. The anterior aspect is a flattened surface upon which three ports are located--these ports deliver power to one, two, or all three of the included finger-attachments.

The set also comes with set of sleeves which can be slipped onto the mini-vibrators; these can serve both as stimulation variety (each sleeve have a different contact landscape, from random bumps to raised concentric circles) or easy clean-up (just slide the sleeves off and wash/soak.
Experience
This toy seemed like it would be a lot of fun in bed, but when put into action it was rather disappointing. The fact that this toy uses AAA's is a little annoying (though it could just be a pet-peeve of mine). Why not AA's? More power and the size/weight difference here isn't even that great. The toy also doesn't seem to be calibrated properly, as the vibration function doesn't really kick in until the knob is turned past a certain point (usually around the 40-50% mark); and then even after that, the intensity seems to have only two grades (the second of which activates between the 90-100% mark). Why even have an intensity knob if there are only two settings? This can also change depending on how many of the mini-vibrators are connected to the powerbox. With fewer inputs, greater resolution between settings can be achieved and the knob seems to act more as it should. But this should be the case with 1, 2, or all 3 vibrators plugged in.

Another annoying factor which cannot be avoided is the character of this toy's vibration. The motors are so tiny and the eccentric masses (the off-balanced pieces of metal which allow for vibration) are even smaller. The result is a kind of high frequency vibration that almost stings. The stimulation also feels very topical (unlike the deeper vibrations of larger-motor vibrators such as the Hitachi). The Misses and I attempted to enjoy this toy but it simply couldn't be done. She was more tickled by the vibrations than she was pleased. We attempted to use the Fukuoku on other parts of the body such as the nipples and had a little success which lends some utility to this otherwise disappointing tool.

The included sleeves do little to add variety as they all seem to feel alike (especially when paired with the high-frequency character of this toy's vibrations). The power leaves something to be desired (wishing the setting could go just a bit higher). The battery life isn't all too great, either. Perhaps 4-5 (3-45 minute sessions). The toy was best used as a small supplement to other, more effective methods/toys. Honestly, the Misses and I bought this toy about 5 years ago and we've only used it about 5-10 times. It's just not worth the time.
This content is the opinion of the submitting contributor and is not endorsed by EdenFantasys.com