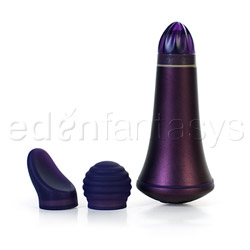 This little guy is fun and kind of space-age in appearance. It functions well, but is a bit pricey for the results. I love the scoop shaped attachment, but it's not worth the price alone for just that one element. If you are on a budget, I would suggest looking elsewhere, as you won't get as much bang for your buck with this toy.
Pros
Compact Size. Battery Included. Wide Variety of Functions.
Cons
Price. Vibrations Could be Stronger. A Bit Loud.
Rating by reviewer:
4
extremely useful review

The Trojan Midnight Collection Interchange 3.5 is a compact, multi-function clitoral stimulator. It's small shape and milder vibrations make it a great choice for a beginning user. A more advanced user could use it as a warm up or with a second, larger toy for added stimulation. It would also make a good choice for traveling, as it comes with a storage pouch and is tiny enough to slip into the smallest of bags. I would caution users who have shared living situations or need more privacy, as it does tend to be on the loud side, especially at the higher settings. It is only splash proof, so it cannot be used in the tub, shower or pool. The price also makes it more of a luxury item, so keep that in mind as well.

The body of the 5.3 is completely smooth and made of hard, body safe ABS Plastic. It is Phthalates free and Latex free. It had no smell or taste to it.

Without the heads, this toy would not be anything too special. The texture on the Juicer and Ball heads is not quite pronounced enough for adding to stimulation. The Scoop is the standout and the one I use most frequently. 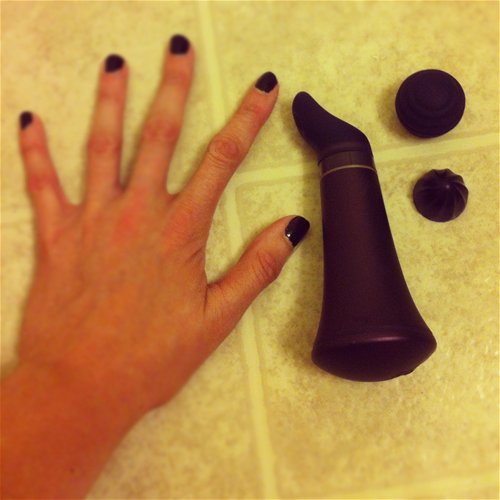 The Interchange is nice and compact, at only 4". Add 1-1.5" depending on the tip chosen. This makes it great for travel, particularly since it comes with a nice satin travel bag. This small size also makes it comfortable to use and nice for beginners or those who are intimidated by larger toys. It worked well enough, and functioned as it was described. I wish that the heads had a little more texture, though, as the ridges on the ball shaped head could barely be felt when in use. The design is interesting and reminds me of a little space rocket.

The toy comes with the single required AA battery, which is a nice bonus. The base unscrews and the battery pops easily inside, shown in the photo below. 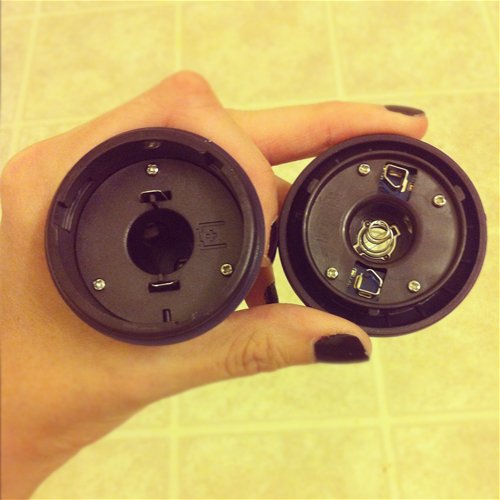 It is controlled by + and - buttons on the base. Push the + button to turn it on and move through the functions. One nice feature is that you can use the - button to go back, rather than having to cycle thorough all the functions to get to the previous one. Press and hold the - button to turn off the toy. You can also push it until you have gone backwards through the functions for it to turn off. The first five of the functions are steady vibrations, increasing in intensity. After the steady vibrations, the toy has three patterns, which are as follows: rolling wave pattern, mild pulsing pattern, varied pulsing pattern. My favorite function is the highest steady one. The vibrations are on the buzzy side and not very deep. They travel the best through the Scoop shaped tip.

This would not be a good choice if noise is an issue for you. It is very loud for being such a small toy. A blanket, or even a closed door would not muffle it completely. A television or radio at a moderate level would be able to, but that could be distracting. Just steer clear if you need a toy on the quiet side.

The interchange is easy to care for. Wipe down the base with a damp cloth or toy wipe. The tips can be washed in soap and water or with toy cleaner. It cannot be sanitized, nor easily used with a toy cover or condom, due to the shape, so exercise caution when sharing. A water based lubricant would be best used, as two of the tips are silicone. It is small enough to be used with other toys, so make sure the lubricant selected is compatible with all toys that are being used. Once you are done, remove the battery and store everything in the included satin pouch.

The outer packaging is the same purple color as the toy itself. While it is not directly apparent that it contains a sex toy, just a bit of looking would give it away. There is plenty of informative information on the box, in regard to the toy and the company. It is a bit difficult to open, and is too bulky to keep for storing the toy. 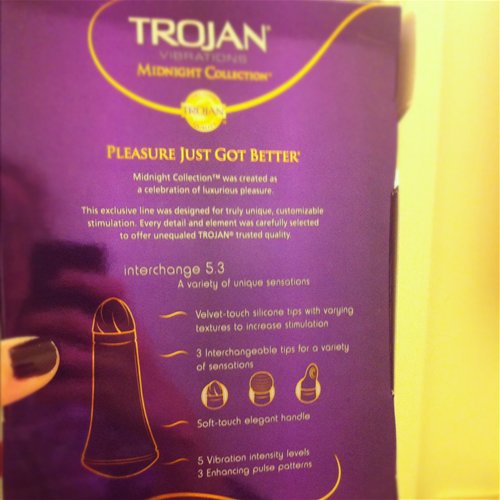 This is a nice, well made toy, but for the price I was expecting more. It is fairly loud and not too strong, so keep that in mind when purchasing.

Trojan midnight collection compact 3.3
$49.99
Follow-up commentary   I don't like it anymore 2 months after original review
It's not that I don't really like this anymore, I just have other toys that serve the same purpose that I like better. It is a bit bulky and cumbersome for my taste and I only enjoy one of the attachments, the scoop shaped one. It isn't necessarily a bad toy, and it would be wonderful for a variety of users, but it has definatly found its way to the bottom of my stash.
This content is the opinion of the submitting contributor and is not endorsed by EdenFantasys.com

Reviewed by SkylarrStarr (Eden Writer) "And the day came when the risk to remain closed tighly in a bud became greater than the risk it took to blossom." Anais Nin
Rank
5.9
wrote 51 reviews
Comments
Make a post
Forum
No discussions yet.
Thank you for viewing Trojan midnight collection interchange 5.3 – clitoral stimulator review page!
Top