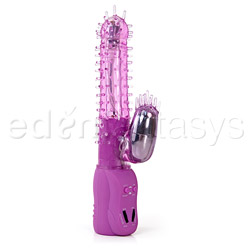 Cupid, draw back your bow!

Cupid’s Punk Rock Rabbit would be an excellent introduction for those looking to try something a little more “extreme” in their rabbits, like a tickler-covered shaft and vibrations in the tip. It is fairly powerful, multi-speed, and easy to control.
Pros:
Very soft ticklers and yielding shaft, vibrating motor in head of the rotating shaft
Cons:
Rather noisy, does not appear watertight
Rating by reviewer:
3
useful review
When I first saw Cupid's punk rock rabbit, I was a bit intimidated by the quite long ticklers that cover the entire shaft. Those protruding from the top of the clitoral stimulator looked quite lovely, but I was dubious about the others. My fears were alleviated, however, as soon as I opened the package. This product is SOFT, and the ticklers actually do their job of tickling and caressing instead of poking and scratching.

There are two very unusual features of the shaft of Cupid’s Punk Rock Rabbit. The first is that, even though the shaft rotates, it also contains a vibrating motor in the head for extra internal stimulation. This is a feature for which I have been waiting a very long time, and it was a pleasure to discover it in this product! The second unusual feature about the shaft is that it is very soft and squishy—the material yields easily to pressure, and it seems as if it has a hollow core surrounding the rotating mechanism. This pliability further enhances the softness of the ticklers allowing for comfortable insertion and use.

Cupid’s Punk Rock Rabbit is made from TPR, so it is safe to use with silicone or water-based lubes. It cannot be sterilized, so sharing is not advised. The TPR is very soft, however, and creates a delicious tickling sensation both internally and externally on the clit stimulator. The clit stimulator is covered with long tendrils on the top and is refreshingly NOT shaped like an animal!

The battery and control pack is at the base of the vibe, and the controls are fairly easy to use. There is a simple on/off button, a button to reverse the shaft rotation, and two dials to control the speeds of both the shaft and the clitoral stimulator. The vibe is quite noisy when both functions are on their highest speeds, but is surprisingly quiet at lower speeds.

The packaging indicates the vibe may be used underwater, but honestly, neither the battery pack nor the seal between the TPR and the base appear waterproof to me, so I would keep this one out of the water.
This product was provided free of charge to the reviewer. This review is in compliance with the FTC guidelines.