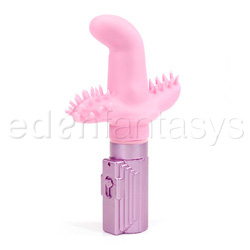 The shaft of the Triple Teaser is quite short, but with a distinctly angled tip for G-Spot stimulation. The toy is not designed so much for thrusting as for exploring the G-Spot area while stimulating the external sexual organs. The tip is soft and flexible, but still firm enough to provide intense G-spot stimulation.

The battery is housed in a convenient long handle with a simple slide-switch control that lets you vary the pulsation patterns and speed of vibration with a single control. Getting the Triple Teaser positioned properly may take some trial and error, but you will definitely not have any trouble fumbling with complicated controls once it&rsquo;s in place.

All in all, I highly recommend the CyberSilicone 5X Triple Teaser to those who like powerful, intense stimulation spread over a wide surface area combined with pinpointed G-Spot thrills. If you&rsquo;re not timid, definitely do yourself a favor and try this one out!
Follow-up commentary 6 months after original review
I'm really thrilled by all the intrigued feedback I've received on my original review of this toy. Yes, it looks strange, I know, I know. But in terms of thorough stimulation, it is truly difficult to beat! It is particularly wonderful for those who enjoy having their perineum stimulated, or who are not quite ready to try direct anal stimulation but want to start slowly exploring their posterior regions. The 9V battery is something of a novelty in toys, and&nbsp;sends this toy (and you!) skyrocketing! Especially considering the silicone material, I think this vibe is truly one of the best deals out there!
This product was provided free of charge to the reviewer. This review is in compliance with the FTC guidelines.