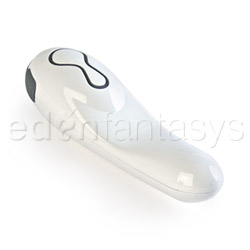 From the moment you open the package, it's easy to feel that the Liberte massager from Extase is a high quality toy. It comes nestled in the top of a sturdy cardboard jewelry box-type container, with a pull-out tray underneath that holds the charger, user’s manual, and a thick storage bag for those who wish to travel with it.

The Liberte is made of hard hypo-allergenic plastic that has no scent, no taste, and no phthalates. Its super glossy surface is so smooth that a body's natural lubrication is enough to let it slide over the clit easily. There is a shallow inset seam that runs laterally around the toy, but it isn't noticeable at all during use.

The simple ergonomic design is like a 1" wide lightly curved finger, which nestles over the pubic bone and seems to rest intuitively over the clitoris. The tip is rounded so that pinpointing the vibrations on a particular spot is never uncomfortable, and the control end is wider, making it easy to get a "palm grip" on.

On the very end of the handle is a smooth convex window with a white LED light that glows in a tuberose shape. It's extremely useful, because it will blink white when the toy is charging, turn off when it's charged, and turn to red when the charge is getting low again.

Measuring barely 4" long, the Liberte is easy to tuck away in any small spot of your room, or to slip into a purse or travel bag. The charger is also rather smallish, and the plug-in tines fold down so it's flatter and easy to store as well.

The Liberte arrives with its Li-ion battery drained, so you have to charge it before use. There's a tight-fitting silicone flap attached down by the LED window that you peel up to expose the charging port. The manufacturer says that if you charge it for two hours you'll get three hours of play, and it will hold that charge in storage for up to 90 days. We suspect that the play time may be a bit longer though, because we've used the toy almost exclusively this week through several foreplay and masturbation sessions and it's showing no signs of slowing down.

The control pad is shaped roughly like a figure eight, with one round being smaller than the other. To turn the toy on or off you press and hold it for 3-4 seconds, then press again to change settings.

There are seven vibration patterns to choose from.

The first three are steady vibrations from low level, which is a very gentle thuddy vibration, to high, which is powerful but not numbing. Setting four is a repeating pattern of one short buzz and one longer one of the high vibration level. Five is a pattern of two short buzzes and one longer, also of the highest vibe intensity. Six is a rapid musical-like pattern, easiest described as; hum, buzz, hum, buzz, hum, buzz, huuumm, buzz. Setting seven is a repeated 10-second long ascent from the lowest vibration level to the highest.

Theoretically, pushing the bigger round of the control pad lets you cycle one level at a time up through the vibration settings, and pushing the smaller round cycles down, but we found that to be touchy on the toy we tested. If we were *extremely* careful to press the controller just right, we could get it to perform like that, but more often than not it would skip a level or two. It's not something that bothered us too much because we each had our favorite settings and once we found them we were happy. But for people who like to start out slow and cycle upward, it would be annoying.

To protect the battery, the manufacturer cautions us not to use it while it's charging, and not to leave it plugged in for more than 24 hours.

The Liberte is splash proof, so while you can't submerge it, it's perfect safe to wash it with antibacterial soap and water. Don't use alcohol or any oils. If you want to use a lubricant, stick with the water-based ones only.

Alan says:
As a couple I'd say the best thing about this toy is how easy it is to make Michele feel good with it. It seems that I can't go wrong with it as long as I've got it facing the right direction (which is a no-brainer). I also like that I can hold it in one hand and still have fingers free to do other things. On me, the medium vibration is the best for getting hard, especially when Michele hooks it under my testicles so the tip presses into my perineum.

Michele says:
The more I use toys the more I learn about myself, and I've figured out that if a clit toy's vibrations are deeper/thuddier, it doesn't take as much power to get me off. The Liberte is like that; not crazy intense, not for the 60-second "quickies", but plenty to take me over the edge with time. We're only going to give it four stars because we know the touchy control thing might be an issue for some people, but if I were to base it just off of my own experience, it'd be five stars.
This product was provided free of charge to the reviewer. This review is in compliance with the FTC guidelines.