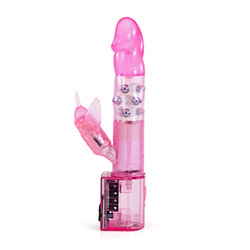 So far this is the best rabbit type vibe I have tried by far! It stimulates everything with the ability to do so very intensely on the highest setting or mildly on the lowest. It also doesn't seem to draw power away from another feature when they are both turned on. I highly recommend it and hope to never have to part with it!
Pros:
Powerful, Cute, Everything either rotates or vibrates, pleasant scent, Extreme stimulation!
Cons:
I would prefer this in silicone.
Rating by reviewer:
5
extremely useful review
When I received my decadent indulgence vibrator|Decadent indulgence in the mail, I could hardly wait to try it out! The box had a picture of a woman on it and described the various functions of this great vibe. It stated that there are 8 levels of intensity for each function as well as the ability to control the rotation and vibration independently. There is also the option of reversing the rotation of the beads.

Another thing that the box stated was that this vibe was made from hygienically superior TPR not Jelly as listed under the properties tab of the description. I’m not sure if this is a new feature or not but, either way, a condom is recommended while using a Jelly toy because it is porous and cannot be sterilized. On the other hand, a condom is recommended when sharing a TPR toy. Both Jelly and TPR can be cleaned with either mild soap and water or a toy cleaner of your choice.

When I opened the box, I also noticed that the vibe I received was in fact pink like in the product picture but, not purple as described under the properties tab of the description. Again, I am not sure if this is a new feature or not. Also, the vibe gave off a floral type scent which I personally thought was kind of pleasant. It did seem kind of oily fresh from the package so, I took it in the bathroom and washed it off with soap and water.

Now for the fun part! I placed 4-AA batteries in the vibe and turned it on and WOW! This thing has got some power! You could just see the beak of the hummingbird clitoral stimulator flutter like crazy! I was in for a treat! When my husband inserted it inside me, I felt the full impact of the wings and beak which were amazing! So much stimulation there! A beak for my clit and two wings for my lips! I could have gotten off on that alone! When the rotation was turned on as well, it took me a whole 5 minutes at the most to orgasm! I've never in my life gotten off so fast with a toy! And just so you know, the head of this toy also rotates! I highly recommend this if you are looking for a no nonsense, get me off now toy!

The controls are pretty basic, one side controls the vibration speed and the other controls the rotation speed. Both sides have a + and - to either increase or decrease these functions while in the center is a button to reverse the rotation. There are LED indicators on each side to let you know which intensity level you are on. I didn't even need the highest speed on this one! The box did describe this toy as being quiet (another new feature?). While I don’t think it is as noisy as the previous reviews, it does make some noise but, all in all, I highly recommend this vibrator! It’s definitely worth every... single... penny!
Follow-up commentary 8 months after original review
This is still one of my favorite rabbit vibrators ever! As a matter of fact, I believe it may be my all time favorite. It’s never given me an ounce of trouble but I always make sure to remove the batteries before storage. Otherwise, there’s a chance the batteries could leak during storage and ruin the toy. This is not a cheap vibe so it’s just better to not take that chance!

I’m ecstatic to see that this vibe has been upgraded from Jelly to TPR in the properties tab! At least it’s a small improvement, right? TPR is still a porous material so make sure to cover it with a condom if you plan on sharing. It can be cleaned with either warm water and soap or your favorite toy cleaner. Just remember that it’s not waterproof! You should use care during cleaning so you don’t get water into the controls or battery compartment as this could cause permanent damage to the toy.

You can either use water or silicone based lubes with this one. Both are safe options and won’t harm the material at all. Just remember that silicone lubes might be a bit harder to clean off when you’re finished.

There’s been no malfunctioning with this toy at all! The beads still rotate and the clitoral attachment still vibrates. I really have nothing to complain about. I've used it pretty regularly too.

The only complaint that I have encountered is that some might find that the beak is a tad bit too intense for them. While this was not a problem for me, you can easily snip off a bit of the beak if you find it too intense. That does help to dull the pinpoint vibration a little bit and make it more useable to sensitive clitorises!

Well, that’s really all there is! It’s worked out fantastic for me and I’d definitely replace it if mine were to break. Since it hasn't broken yet, I imagine it will be around for quite some time to come!
This content is the opinion of the submitting contributor and is not endorsed by EdenFantasys.com