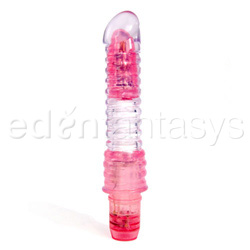 The Icicle Flexi-P is not trying to be coy with you. It's not going to send you suggestive winks or nudges, and it probably isn't going to rub your knee under the table. Its mission is obvious, its strengths are pronounced, and its bells and whistles are minimal. It's long enough for hard-to-reach G-spots, girthy enough for the discriminating pussy, and provides enough texture for the easily bored. It's got three solid features going well for it, with one notable exception: its capacity to vibrate. Advertised as a dildo, I'd say it is a moderately successful toy. In terms of vibration? It's got about as much vibration going for it as a real-life icicle might; that is to say, the vibration on this toy is the dollar store water gun to the Hitachi's assault rifle.

The packaging boasts its waterproof feature, but I'd be careful about fully submerging this toy as there is no rubber seal for the battery compartment. Shower use is definitely okay, but if you plan to do any kind of scuba-masturbation, you might reconsider.

Mmm. There is nothing like the odoriferous waft of jelly in the afternoon, wouldn't you say? The glorious stink of a new toy is strong on this one, though to be fair, you do have to get your nose up within an inch of the thing before it starts to hit you. I washed it once with mild soap and it still has some jelly-stink on it, so I imagine I'll have to exorcise the demons out of this one with some hot water and vigorous scrubbing. Do bear in mind that because this is a dastardly jelly substance, you cannot boil it to sanitize, so either make sure you're okay with swapping on a cellular level with any partner you might share this with or keep it to yourself.

The texture is quite obvious as it is ribbed with medium-sized ridges all the way down save for the mock penis head at the top, complete with a semi-realistic ridge -- you know, as realistic as it gets for a transparent pink, ribbed cock. The ribs are definitely more prominent than the kind you find on condoms, but I didn't find it added to the experience much, if at all. If ribbed is your thing, you'll probably appreciate it more than I did, but I can't feel much of a difference either way.

I do enjoy the feel of the material. Jelly has a bad rap in the sex world, especially with the prevalence of silicone and other more realistic, forgiving, and ultimately safer materials; but I was pleasantly surprised. It was firm without being too "pokey" -- not exactly squishy but just enough give to make insertion comfortable and to differentiate it slightly from traditional, nonporous plastics found elsewhere. If you're looking to take a step up from hard plastic, I think this would make a nice upgrade for beginners. Advanced users are probably going to yawn with contempt at its lackluster texture in comparison to more expensive materials.

Do bear in mind that this is jelly, and it is not marked as being free of phthalates. Do your research on the subject and decide if you're comfortable with the information out there in order to make a more informed decision before purchase.

The one big selling factor for this toy was its flexibility. In the shaft of the toy, there is a flexible white tube (as you see on bendy straws) that allows you to manipulate the curve of the toy. This is probably a plus for some as it allows better G-spot penetration. For me, it was a big 'eh, okay' as I did not find that there was any magical orgasmic nirvana at, say, a 34 degree angle as compared to when it was fully upright. The flexibility of the toy in general was nice for hitting certain angles while in motion, but I saw no incentive to bend the thing beforehand and pretend to be fucking myself with a right angle.

The great news about this toy is that it's quiet -- very quiet, in fact! You may not even need music to mask the noise, and I'd venture to say that it would be very difficult to hear from the other side of a closed door. Dorm-dwellers, rejoice!

The dial itself is so-so but easy to use. There is a definite difference from the lowest setting to the highest, but that would be relatively speaking; all the vibrations are still rather marginal on the whole. If nothing else, it offered a nice place to hold on to mid-action.

Again, take heed when using it with water; even just the initial cleaning I gave it allowed a little water underneath the battery cap, so I would be wary if you want to use it in a bath or a pool.

Sweet mustache, this thing is the lint-magnet to end all lint-magnets. I spent five minutes just trying to get one of my own hairs off of the damn thing. Please, for your own sanity, find a box or a bag to put this thing in because it makes Katamari look like a romp through the meadow in comparison. Trying to put it into a satin-lined bag was an experience marked by the jelly snagging and trying to eat every last bit of lining it came into contact with. What should've been a quick drop into the bag turned into a harrowing experience of just trying not to let it touch anything at all and ultimately dropping a lion's share of four-letter words. If you happen to have some kind of anti-gravity chamber or if you could perhaps suspend it in some kind of cryogenic fluid, do consider it. But then, if you have that kind of equipment available, you probably have more important things to do, such as test drive your new jet pack; so don't worry about it.

The packaging is so cute that it's almost distracting. I legitimately forgot for a moment that I was holding a box containing a rather phallic object and realized I was standing in the living room scrutinizing a vibrator, nearly in the presence of a male roommate. After I came to my senses and retreated to my boudoir, I got to inspect things a bit closer. The box is simple, transparent plastic. The lid on mine must've gotten bumped open in transit. The company might consider investing in two cents' worth of tape to keep that lid down, but there is an inner plastic molding that fits around the toy, so I let it slide.

There is a tiny (and I mean minuscule) round-shaped reassurance in the upper right corner that insists that this toy is "Safe and Pure (for body & pleasure)" -- and thank goodness, considering how exasperated I've been lately at my vibrators arriving as unsafe and impure. All joking aside, I'm not sure what they're trying to insinuate there, but thanks for the heads-up.

Instructions are included, but figuring things out on your own isn't too difficult, either. You could probably use the box for storage if you really wanted, but it's not terribly discreet.

The only reason I rate this toy fairly high is that even though it has lackluster vibration, it still serves as a moderately successful toy in spite of it. The length, girth, and texture make up for the weak, dial-based vibrations, and I do believe someone more sensitive than myself could really find a solid, satisfactory toy here. I give California Exotic an A for effort but a D for execution. A better motor would make all the difference. As it is, I don't feel it's worth the $30 but would consider paying less.

I'll be honest, this thing makes a poor excuse for a vibrator, and that much hasn't changed in a month's time. In fact, I removed the batteries permanently and forgot it ever required them! However, as I mentioned in my original review, this toy has it right in the length, girth, and texture department. Even the material, the underdog known as jelly, is not the worst thing in the world, and the smell has diminished considerably with a few washes. It will probably never permanently go away, but unless you're into rubbing your toys under your nose, you will likely not notice the smell after a few uses.