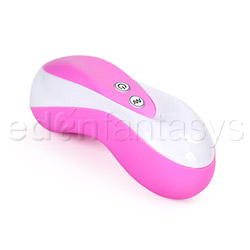 Disappointing as a sex toy, but decent as a massager.

This vibrator is a good, non-intimidating option, but it's not going to be for everyone. The design of it makes it so that it is unable to provide pinpoint stimulation, so this is gong to be best for those of you that prefer broad stimulation. Also, it's not going to be a good choice for those that require a lot of power, as this toy is pretty weak. For me, this toy was kind of a flop sexually, but it did feel great as a massager on sore muscles.
Pros:
Easy to hold, Cute, Non-intimidating, Easy to use, Comes with a pouch
Cons:
Weak, A bit buzzy on the higher settings, Unable to get pinpoint stimulation
Rating by reviewer:
3
extremely useful review

This toy is not insertable due to its size and shape, but it is great for providing clitoral stimulation. It's also fantastic for use on other areas of the body, such as your nipples, outer vaginal area, and even the area just outside of your anus.

The plastic of the toy makes up the top of it; the white area, and the pink area where the buttons are located. Plastic is hypoallergenic, non-porous, phthalates-free, and latex-free, earning a safety rating of an 8 on Eden's safety scale. The plastic portion on this toy is glossy and smooth, yet very easy to hold onto.

The silicone portion of this toy is the bottom, where your toy will touch your body. Silicone earns a rating of a 10 on the safety scale, as it is hypoallergenic, latex-free, pthalates free, and non-porous. The silicone on this toy has a matte feel to it, yet it doesn't have much drag at all. It does glide easily over the skin, as well, since the texture is completely smooth.

The silicone on this toy does not have any squish, nor does it bend at all.

Also, there is no scent or taste to be found here.

This toy is very ergonomic, as it fits the curves of the body comfortably. It can also be held very easily in the palm of your hand. You could potentially lay this on your body and have it stay there, if you're in the right position.

This toy is waterproof, as it does have an o-ring of sorts. I was a little skeptical of the waterproof capabilities, but this toy has held up wonderfully to being submerged.

Also, this toy is pretty discreet. It looks nothing at all like a sex toy, and I have no issue at all leaving this out where company can see it.


This toy has two buttons. There's the on/off button, which looks just like a little circle with a line. Then there's a sort of wavy button. To use the toy, you need to press the power button. Once you do that, the toy will light up, but no vibrations will start yet. You now need to hit the little wavy button.

To turn the toy off, you need to hit the power button. It's pretty cool that there's an instant off button. just in case you get interrupted while playing.

If you find yourself needing lubricant while you're using this toy, you should reach for a water-based product. This is because silicone-based lubricants could potentially destroy the material. That being said, I, personally, haven't felt the need to use lube with this toy.

Now, what about cleaning? That's pretty easy. This toy is waterproof, so you can use antibacterial soap and water to clean it. Or, if you like, you could use your favorite toy cleaner, or a toy wipe. Lately, I've taken to cleaning my toys with LELO's toy cleaning spray, and that works wonderfully on this toy. I clean the toy both before and after use, because this toy can sometimes pick up bits of lint -- although it is not as much of a lint magnet as some of my toys are.

For storage, this toy comes with a handy little pouch, so I'd suggest storing it in there. I'd also recommend removing the batteries, as leaving in the batteries could cause them to die a lot faster than they otherwise would. Also, leaving batteries in the toy could potentially ruin a toy, if a battery were to leak -- I've had this happen with another toy.
This content is the opinion of the submitting contributor and is not endorsed by EdenFantasys.com