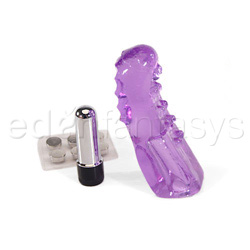 I found myself more frustrated than aroused, despite trying to use it multiple times. Once, I yanked out the bullet vibrator, an even more difficult task than putting it in, and tried to use it for clitoral stimulation. Its small size and high vibration made it only slightly better. This could be a good toy for women who have a significantly easier time getting off than I do. For tough girls like me, it is more of a hassle than a help.
This product was provided free of charge to the reviewer. This review is in compliance with the FTC guidelines.