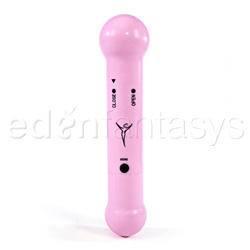 The first thing that happened was the little Velcro fasteners on the cardboard box tore off the box rather than splitting apart as they should. This in turn tore the instructions copy off the box and made it very hard to read. No big deal, who reads the box anyway, right? What we girls really want is the prize inside the box. So I proceeded.

I opened the box and found a gorgeous little purplish pouch to carry this massager in. An excellent touch. Again, I was expecting the massager to be the same. So I proceeded.

The first thing I did was to open the Hestia (which my husband has now nicknamed the Hysteria), and began to place the three brand new AAA Batteries in it. That should be easy as they have little stickers inside that show how the batteries go. So I put in two with the negative side up and one with the positive side up just as shown. Put it back together…NOTHING! Took the batteries back out and placed them in another item to see if they worked. They worked fine. So I put them back in the way it instructed. Still nothing. I thought maybe it was backwards so I put two in Positive side up and one negative side up. Still nothing. I tried all three batteries in various combinations for about 10 minutes until finally I put all three in Positive side up and put it back together and it worked (well, it turned on anyway).

There was so little vibration that I could barely feel it. It said dual motors, but honestly it just barely vibrated at all. It was hardly anything. I took the batteries back out and put in brand new ones. Same thing. I left it on and walked into my husband’s office. I said check this thing out, and handed it to him. He, being Mr. fix-it (or so he thinks), looked for an adjustment. None! Just on and off. He went and got some new batteries and tried every combination he could think of. Nothing. He came back into the room I was in and tossed the massager on the couch next to me and said “here is your hysteria.” I said “it’s Hestia.” He said “not to me,” and laughed as he left the room. Mind you, it had only been on a total of about 15 minutes with he and I both trying to get it to move. And then the batteries went dead. What a total disappointment.

The box said powerful. I disagree. I tried to use it, but had no real interest as it did nothing for me at all. I read the Berman statement on the side of the box. I am wondering if I got a bad product or the women she worked with have no real clue what women really want. Sorry for the poor review, but this was just bad.
Follow-up commentary 18 months after original review
I pulled this out of the toy box the other day to just give it another whirl. Thought maybe I was being a bit to harsh on it the last time... NOPE still hate it. Actually what I am trying to do is make room in my Toy chest for more and newer toys. Trying to decide which ones to get rid of is often hard. Not in this case. This little beauty was easy as can be to place in the "This is junk" pile. I have it in a box. If you want it, e-mail me and it’s yours. I have made it so appealing that I am sure you will want it right?
This product was provided free of charge to the reviewer. This review is in compliance with the FTC guidelines.