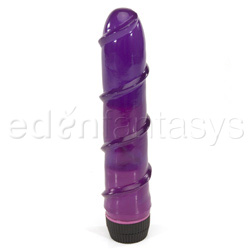 I would not recommend this toy for beginners. I had some issues using this toy for insertion on my own, due to its large size. Though, when my partner used it on me it felt great! Its vibration is powerful enough that it can be felt quite well when inserted.

The vibrations are also great when used externally for clitoral stimulation.

The Jupiter is made of jelly, and is very porous, so no sharing between orifices or partners unless you use a condom. When I opened it, I noticed a strong odor, but there was no taste to it. I'm hoping that the smell will go away with time and washing.

The jelly is flexible and squishy, and feels great. The spiral texture is something I would not recommend to beginners. It was rather intense for me until I got used to it.

Thrusting isn't the best motion for this toy, due to the spiral texture. Using a twisting or "juicing" motion feels amazing. It is a bit painful to insert at first, but the twisting motion helps with that. It is long enough to use easily once inserted.

The toy measures: 7 1/2 inches from tip to base, with 6 3/4 inches insertable and 1 1/2 inches in diameter, contrary to the stated measurements on the page. Not that that is a bad thing. :)

The control is a knob on the bottom of the vibe. It it pretty easy to turn one handed, but the battery compartment opened on me a few times while I was adjusting the speed.

This toy is not waterproof, so don't take it in the shower.

The motor is located about half an inch down from the tip of the toy. The vibrations are strongest towards the tip, and get weaker as you move down the toy.

The Jupiter takes two AA batteries, which was not stated on the packaging.

I just keep the Jupiter in a tote bag in my bedside table. Jelly is compatible with all types of lubricants. And washing is simple with a mild soap and warm water, just be careful not to get any water on the control knob. Jelly is a bit of a fuzz magnet, so make sure there isn't any lint on it.

The packaging of the Jupiter was a blister sealed clamshell. (Thank goodness it wasn't heat sealed!) Though, as per usual, there was a scantily clad model on the package. There was not much information on the package, but it was pretty straight forward how to insert the batteries.

Here is a comparison photo of the Jupiter and my Blueberry Bliss vibe:

Uranus
$15.99
Follow-up commentary   I don't like it anymore 3 months after original review
I have upgraded my toy collection with glass and silicone toys, so this porous jelly toy has been sitting lonely for a while. I don't really like the large size either, as it is difficult to insert.
This product was provided free of charge to the reviewer. This review is in compliance with the FTC guidelines.