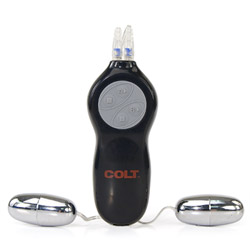 It said on another review that it was waterproof, so I decided to take the test. I cleaned it under running hot water, and it worked just fine when put to use. This makes it excellent for using in the tub, just be careful not to get the control wet since that is definitely not waterproof.

The Colt twin turbo bullets are also perfect for partner play. I did not get the chance to try partner play since my boyfriend currently is not here, but the cords are rather long making it easy for both partners to have plenty of length to play with each other.

The Colt twin turbo bullets are also perfect for partner play. I did not get the chance to try partner play since my boyfriend currently is not here, but the cords are rather long making it easy for both partners to have plenty of length to play with each other.

When I first opened the package and held the bullets in my hand, I was pretty surprised. The material on the page says that the toy is plastic, so I assumed everything, even the bullets, were plastic. The bullets had a bit of weight and were a tad colder than the warmth from my hand. This led me to believe that the bullets are not plastic but metal, so I went ahead and did a few "tests." I decided to taste the bullets, they have that metal taste, but it is only enough to let you know what it is. I also took a few nibbles, and my teeth felt like they were biting a spoon, so I'm almost certain that the bullets are metal (maybe not all the way, but the coating certainly is). I feel that this material choice is perfect for anyone because it does not have any drag on it. It also will not absorb lube, so there would be less application, as well.

The bullets are about 2.25 inches, meaning there's plenty to hold on to for outer body stimulation and a nice filling size that wasn't too big nor too small for insertion that even beginners can use. Both cords are about 2 feet and 9.5 inches long, making it extremely easy to play all over and not worry about running short on wire. Also, because of the bullets rather small size, it makes it easy to use another toy along with this one.

Insertion was really easy because of the metallic coat and the rounded ends. It practically pops right in. When using for insertion, I think that the stronger vibrations are best because those were the ones I was able to feel best.

Everything about the toy and controls were wonderful, but if I could have changed one thing, it would have been the bullets. They were fine as they were, but if they have a little handle, it would have made removing after insertion easier and last longer. I'm most concerned about using the wires to pull the bullet out, but then again, this is my first egg, so I might just be paranoid.

As for the design being discreet, I do not think so. I think most people would be able to assume it has a purpose, though if someone just saw the bullets unplugged, they might wonder what it is used for. Taking the toy for travel is up to you, it has removable wires so the wires will not tangle and you can keep the two separate. Personally, I'm definately taking it for travel, but only if I have a bigger bag, my purse is too small to carry the control (though people with bigger purses will be able to carry it easily).

Keeping the toy hidden is very simple and easy. It hardly takes up any room, especially when one takes advantage of the removable bullets. It's perfect for storing in a drawer.

The Colt Twin Turbo Bullets requires 4 AA batteries, which are necessary to keep both bullets powerful and running. You'll know when to switch them once the vibrations start weakening.

The bullets are attached by a jack plug-in, making clean up extremely easy as well as untangling the cords. There's no need to worry about putting the bullets back into the same hole that it was connected to because they can be plugged into either and it will continue to work just as great. Make sure to avoid water near the jacks as well.

When using the Colt twin turbo bullets underwater, they felt just as powerful as using it while not in the tub. The sound however changes quite a bit. When used dryly, it makes a sort of high buzz. When used underwater, the sound becomes a low (though just as loud) rumble. So either way, make sure there's no one around that you don't want to notice.

There are seven preset vibration patterns, and you can stay in any of them for as long as you like (that is until the battery runs out). To switch to the next set of vibrations, all you have to do is repress the triangle/letter button again for whichever bullet you want changed.

If you're inserting and/or sharing with a partner, you should use a condom. Not only does it keep you safe, it also makes it easier to remove and last longer since you're not pulling it out by the cords.

Since the bullets are waterproof and metallic, cleaning is really easy. You can use either hot water and a mild soap or your favorite toy cleaner. Being, metallic means you can use any lube that you'd like (if needed). The control is easy to maintain as well, At most, it might get a little messy, but all you have to do is wipe it with a damp cloth.

Since the control is not waterproof, it's best to keep it away from any liquids. In case the inevitable happens, turn it off immediately, unplug the wires, and remove the batteries to let it dry out naturally (no hair driers) for a few hours (overnight just to be safe). After that test, the toy out, if it works then hurray if not, you might want to invest in another one (I know I sure would).

As for storage, the Colt Twin Turbo Bullets has removable wires, making it easy to store in a smaller area. The storage area doesn't need to be specific either since the bullets won't attract dust or lint.

The toy came in a black and red box with a clear window in the front letting you see your toy. The back shows a picture of the toy and includes the features of the toy (the front includes them as well). It only came with instructions for putting on the battery, but figuring out the toy was extremely easy. The package itself isn't too discreet but it can be reused as a storage box, but I feel that the box takes up a little more space than the toy itself would take.

-
This product was provided free of charge to the reviewer. This review is in compliance with the FTC guidelines.