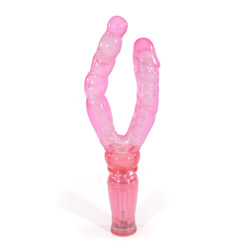 Jelly toys like this should be cleaned with warm water and a toy cleaner. Do not make the mistake that I did of storing it with another old jelly toy which ended up melting a little bit onto this one. I would keep it separate from other similar toys. Jelly toys can't be sanitized so you a condom if sharing it.

The packaging was the standard sort of card stock where the toy sticks out. There were no directions which was bad because I needed some the first time I used it.

I also tried it with a condom and lube at one point just because I read a lot of reviews where they seem to recommend doing that with this type of toy but I just didn't enjoy it. It was too slippery and I had a hard time controlling it. (I never use lube so I'm not used to it).