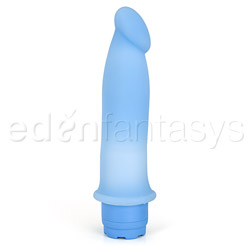 Like many other realistic vibrators on the market today, the Climax has the basics covered. The shaft is nicely formed from durable silicone and the vibrations are consistent and can be felt throughout the toy. What makes the Climax unique is the flexible shaft and the realistic tip. If the rigidity of other realistic vibrators has got you down, this would be a good alternative.
Pros:
powerful vibrations felt throughout the entire shaft, realistic tip.
Cons:
ridges on shaft from silicone mold, possible to open battery case when adjusting speed.
Rating by reviewer:
3
extremely useful review
The Climax’s design is much like any other vibrators. A silicone sheath covers a plastic base with a vibrator in the head. The silicone shell is glued tightly to the base, making a watertight seal. The material is velvety soft in a way that only silicone can be.

The Climax’s base is solidly attached and fully waterproof. Vibrations are adjusted via a smooth twist knob at the base.

The vibrations are powerful even though it only uses two AA batteries. If you’re used to something as strong as the Hitachi Magic Wand, you’ll find the vibrations quite mild. They do, however, seem to be on par with most other well-made vibrators on the market.

The head is nicely designed and more ball-like than one usually sees in realistic vibrators. That makes it is easy and fun to use shallow thrusts during penetration. The head’s design also provides very realistic clitoral stimulation.

Lubricant adheres to the Climax much like it does to all silicone toys. It glides on and stays on the Climax until it is time for clean-up. Remember to use non-silicone based lubricants on silicone toys (including the Climax Ez bend)!

Cleaning the Climax is easy with soap and water or toy cleaner. Although silicone can withstand boiling and being thrown in the dishwasher, I wouldn’t recommend for the Climax. Yes, it’s waterproof, but the plastic base might not be able to withstand high temperatures.

Because it’s non-porous, the Climax can be safely shared between partners. If you’re not using a condom, be sure to clean it thoroughly before handing it off to someone else.
This product was provided free of charge to the reviewer. This review is in compliance with the FTC guidelines.