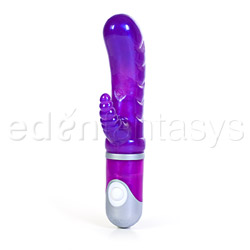 It would be a good starting rabbit if the exterior didn't tear so easily. It was still fun until it broke.
Pros:
Easily bendable, decent vibe
Cons:
Tore very easily
Rating by reviewer:
3
somewhat useful review
The first thing I noticed when we got it was that it definitely was a bit smaller than what I thought it would be even after checking all the pictures. There wasn't much of a smell when I opened it up either.

When it comes to size it seemed to be OK for my partner. We are pretty new to this kind of toy so it was good that it was smaller. The ridges on it are good for external stimulation and the vibe is pretty good for a beginner when used externally. The clit part didn't seem to do much when it was inserted though; I don't think that it fit her very well and the clit part really wasn't long enough to do much. Also when the vibe was turned on it vibrates the larger portion as well as the smaller clit portion. The vibe on the larger part was very uncomfortable for her when we tried it while inserted.

The worst part about the toy was the top part of the toy seemed to have a small manufacturing defect, which ended up tearing into a larger hole after one use. As the toy bends it breaks out of shape because of the hole. I'm not really sure if it was just our toy or if this is a common thing with this toy, but it was a huge problem as we had to throw the toy away after only a couple uses. We didn't want to get pinched and didn't want to have to worry about cleaning it out since the inside of the toy was exposed.