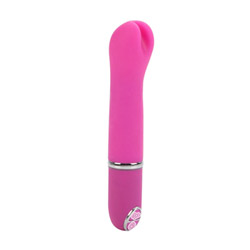 Encased My Clitoris! (No Pun Intended)

The Lia Encaser by California Exotics novelties is a great mini-sized vibe that can be used clitorally and may even tickle some shallow G-spots. This is an awesome vibe that is virtually silent, is easy to travel with and is sure to climb its way to the top of your heart and your toybox!
Pros:
+ Multi-Function.
+ Waterproof.
+ Silent.
+ Inexpensive.
Cons:
- Awkward Shaped Head.
- May Be Too Small For Some.
Rating by reviewer:
4
extremely useful review

The Lia Encaser is a small vibe that can be used clitorally or to stimulate some shallow G-spots. The Encaser offers broad, rather than pinpoint stimulation.

This would make a good beginner toy because its small size keeps it from being intimidating. It's multifunctional, so there is something to tickle everyone's fancy. This would be great for couples play or to use during intercourse, because its small size would make it easy to slide between the two of you. It is also great to use to stimulate the clitoris during oral sex.

This would be ideal for someone that lives in a dorm room, somewhere there are thin walls or any other shared living situation because of how quiet it is.

This toy does contain an O-ring, making it waterproof for playtime during bath time.

The Lia Encaser is made of 100% silicone, meaning that it is a solid 10 on the Eden safety scale. It is hypoallergenic, latex free, non-porous, phthalates free and is made of food-grade material. This is a firm toy, but the head of it is flexible with some give to it.

This toy doesn't collect a lot of lint like most silicone toys do. It has a very smooth texture. There are two seams running down either side of the toy, but they are not pronounced enough to feel with your hand and certainly not during use. It has minimum drag to it, that can easily be taken care of with a pea sized amount of lube. (Water-based only please!) It can be a little harder to hold on to after you've applied lube to the toy.

This toy can be disinfected by wiping it down with a 10% bleach solution. This toy is true to the pink color on the product page, maybe even a little more vibrant. The itty-bitty size of this vibe doesn't make it ideal for thrusting.

I would recommend this material to anyone looking for a high quality toy that is 100% body safe.

Upon opening this toy there was no obvious taste, but there was a very light, indescribable scent, that disappeared after I washed it and allowed it to sit out for an hour or so.

This vibe is slightly tapered with the widest point at the head of the toy. It is a lot smaller than the average penis, and there is a slight upward curve to it, meaning it may be able to stimulate some G-spots, such as my own.
The shape of this toy is very easy to hold on to. This would be ideal for beginner penetration because it is small and someone with larger hands may have trouble holding on to it.

The measurements are as follows: (From the product page)

The Encaser isn't very discreet. I'm sure if you left it sitting it out on your dresser, it may draw attention, especially from those with wandering eyes. However, it will be extremely easy to travel with. You could tuck it away in a sock and no one would ever know.

I would recommend this design to someone that is looking for a small, cute toy. This works wonders for clitoral stimulation, and the whimsical shaped head "encases" the clitoris, if you will, taking you into pure ecstasy. 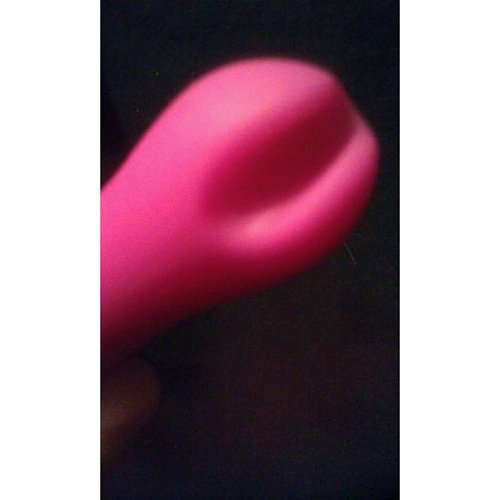 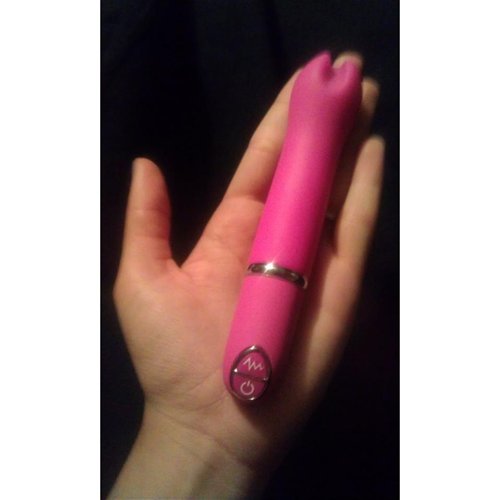 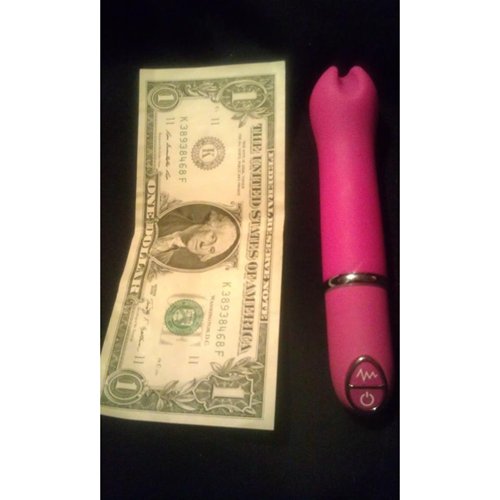 This toy is 3 Vrooms and barely 2 Bees on its highest setting. It can not be heard under a blanket, through a closed door, or over a running shower. If you are nervous, a little background noise should calm your nerves.

This vibe is very simple to use. There are 2 buttons to operate it: a power button and a function button. Simply push the power button to turn it on, and it will start at low. This vibe does have light indicators, so it will glow when it's on. If you continue to push the button it will cycle thought the rest of the functions, and the lights will pulse to whatever function you have it on. It's a useless feature, but it looks cool.

It does have a dedicated On/Off button, so this is great if there is a chance that you may be interrupted. It doesn't have a memory, so when you turn the toy back on, it will be back on the first setting.

There was a small information packet included that described the functions. As described in the packet:

I noticed that it started at low, then medium, and then high. They got it backwards, but whatever.

It does have an O-ring, making it waterproof. I have not tested this yet aside from a quick washing, but I will include that information in the follow-up review. The vibrations are not strong enough to be hand-numbing. I found the vibrations to be a combination of both rumble and buzz, but more on the buzzy side, which i love.

This won't be powerful enough for most. If you are a beginner, and you aren't sure exactly what you want out of a vibe, then this is for you. This would be great for sensitive users, power queens will be disappointed.

This toy runs off of a single AA battery. Now, this is an important piece of information that I wanted to make known. You must insert the battery PLUS SIDE DOWN. If you fail to do this, as soon as you put the battery in, it will automatically begin to vibrate. You won't be able to turn it off or change the function. It is not broken or defective, you have the battery in the wrong way. It confused the hell out of me. 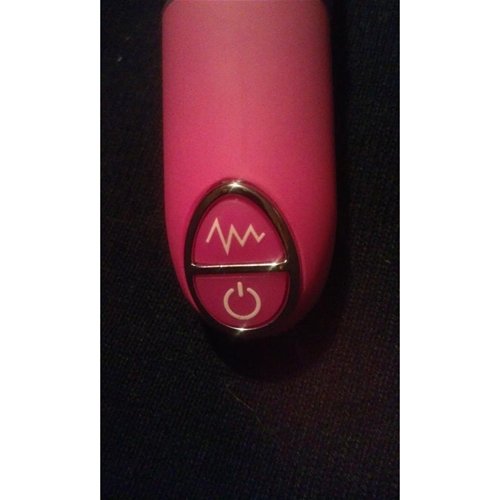 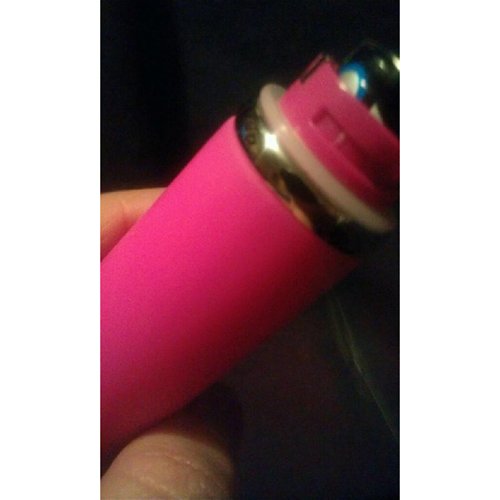 This toy is easy to care for. You can clean/disinfect it any of these three ways:

A. Anti-bacterial soap and water
B. Your favorite toy cleaner
C. 10% bleach solution

It is silicone, so it will need its own storage. It doesn't come with any. The original packaging is too flimsy, but it would be alright temporarily.

If you do store this toy directly touching another silicone toy they will "melt" together, ruining both of them. You should only use water-based lubricants with this toy for the same reasons.

There are no hard to clean seams, but the crevice known as "The Encaser" can indeed "encase" some fluids, so you'll want to pay special attention to that. I recommend washing this toy after each use, and rinsing it off before each use, just in case it collected lint or hair.

The Lia Encaser came in a clear box with the toy on the front and basic information on the back. It isn't very discreet, but there were no vulgar phrases or lewd photographs.

This box is too flimsy to use for storage, so you will need to find a more permanent solution. Personally, I make (and sell) my own drawstring toy pouches, so this wasn't an issue for me.

This box could be wrapped up and given as a gift, but as a bachelorette gift or bridal shower gift. I wouldn't give this for Christmas, because opening it up in front of family and friends could be extremely awkward. Inside of the box was the Encaser in a clam-shell plastic insert and a small instruction booklet. Nothing fancy. I couldn't ask for anything more. 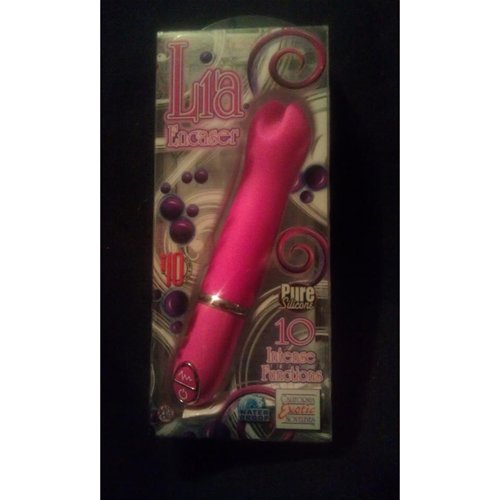 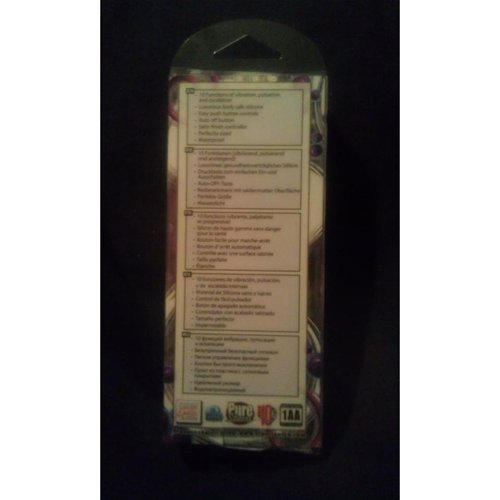 I was very impressed with this toy. It went way beyond my expectations. I underestimated it because of its size and it proved me wrong.

I'm giving it 4 out 5 stars. I would have given it 5 if the head of this toy was a little bigger and was shaped differently. I have only used this toy twice, so I'm not entirely sure of its battery life.

If something happened to this toy I would probably buy another. This and my Dream Massager G have become my go-to toys when I want something small and quiet to take along in my bag with me.

I love the fact that it has cool light indicators, it's waterproof, and multi-functional.

I hope you guys enjoyed reading my review and found it helpful.

I would like to Thank Eden Fantasys for providing me with this toy free of charge to review for them.
(My opinion of The Lia Encaser by California Exotics was not influenced in any way by the above statement).
Follow-up commentary   I still like it 6 months after original review
Even though I don't ever use it, I still like it. Although I find myself reaching for other toys, it's not the encasers fault. It's still good for a quickie ;)
This product was provided free of charge to the reviewer. This review is in compliance with the FTC guidelines.

Reviewed by KinkyNicki92 (Eden Writer) Take care of your body, Its the only one you'll ever own.
Rank
5.3
wrote 33 reviews
This review was edited by
Comments
Make a post
Forum
No discussions yet.
Thank you for viewing Lia encaser – discreet massager review page!
Top