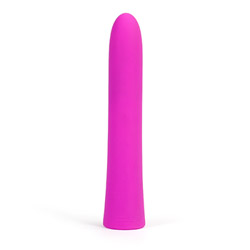 This toy can be taken to play in the water, as well, so it really is a very versatile toy.

The Envy Three is made out of body-safe silicone. Silicone rates as a 10 on Eden's safety scale as it is hypoallergenic, non-porous, latex-free, and phthalates-free.

The silicone on this toy is a thin layer placed over a more firm exterior. The toy has no give to it at all. It won't bend or squish in anyway. The good thing about this thin layer is that it causes the vibrations to transfer very well; some squishier silicone toys can cause the vibrations to seem somewhat weak. That's not the case here.

The silicone is super soft to the touch -- almost velvety. It does have some drag, however, so a water-based lubricant may be desired. Also, despite being described as seamless on the packaging, this toy does have a slight seam. the seam is not super obvious, but I can feel it with my fingertips. Still, it poses no issue when I use the toy, so I can't complain really.

There is no texture on this toy; it's completely smooth. So, texture lovers, you might be disappointed.

The toy does have a slight powdery scent (and feel) to it. It's not unpleasant, but it's there. I only notice it when I hold the toy directly under my nose, so it's also not overwhelming.

Envy is basically just a large bullet vibrator. It measures 7" in length, and technically, you can insert the whole thing, if you choose. I tend to just insert all but an inch of it, as I need something to hold onto. The girth of this is moderate, measuring 1 1/2" in diameter, or 4 3/4" in circumference. To be clear, though, this measurement is for the widest part of the toy, which actually the bottom -- the very top of the toy is just slightly slimmer than this. Size queens won't be wow'd by this, but the size should be great for most users. For me, it was fantastic; just enough to make me feel pleasantly full.

The design is very basic, with the toy being just a straight toy; there's no g-spot curve, or anything like that, so your you won't get much stimulation there from this one. It does have a slightly tapered tip, though, which allows for easy insertion. The tip also allows for pinpoint stimulation when you use this toy externally.

While the design of this toy is simple and unrealistic, this toy still looks like a sex toy. No one is going to look at this and think that it's a massager, really. So, no, it's not a discreet toy, by any means. I would still consider it to be travel friendly, though, mainly as it has a "lock" feature.

This toy is controlled by two buttons on the bottom. The buttons are fairly close together, so it can be easy to hit the wrong one until you get the hang of it. One of the buttons controls the strength of the vibrations, and the other controls the patterns/functions. The one that controls the patterns is marked with a slightly raised F, whereas the other button is not marked at all. The raised F does make it easier to tell which button is which while you're playing.

Both of the buttons will turn the toy on. The unmarked button will start you off with steady vibrations, whereas the F button will start you off with patterns. If you do press the unmarked button and then decide that you want to switch to patterns, that's fine, you can simply press the F button while the toy is already going, too.

The vibrations of the toy are rumbly and deep. At the lowest setting, they're a very deep, rumbly low 2 vrooms, whereas they're a high four vrooms on the highest setting. They're located primarily in the head of the toy, but they do travel well down the toys smooth body. To adjust the intensity of the vibrations, you hold down the unmarked button. A light will flash while you do this, and then it'll come to a steady glow when you reach the highest setting. All of the vibration settings are relatively quiet; I wouldn't use this in the same room as someone else, but I have used it with someone else in the next room. No one was able to detect that this was being used through my door.

As for the patterns, this toy has seven of them. I'm not a pattern girl, so I don't use the patterns very much, but it's cool that they're available to those that like them. The patterns you will find here are your standard patterns, really. There's escalating, pulsating, roller coaster, and combinations of escalating and pulsating.

When you're done playing, simply press the unmarked button one time, and the toy will shut off. When you go to play again, the toy will remember the pattern that you last left off at, but it will not remember the last intensity that you used.

Finally, this toy is waterproof. I was slightly apprehensive about submerging it, since the charging port is open, but like my other Jopen vibrators, this one survived its trip into the bathtub with me.

This toy is made out of silicone, so it's really easy to care for.

Next up, you are, of course, going to want to keep your toy clean. This toy is a lint magnet, so you're going to want to clean it before and after each use. How I clean this toy varies... Sometimes I use antibacterial soap and warm water, and other times I use a toy cleaning spray. Either way works just fine. You could also use a toy cleaning wipe, or even a bleach solution. I wouldn't recommend boiling this toy or throwing it in the dishwasher, though, as doing either of those things could ruin the motor.

Now that your toy is nice and clean, you're going to want to store it some place, right? Sadly, this toy doesn't come with a pouch, so I simply store it in a Ziploc bag for now, which I then place in my toy box. You could really store this anywhere, though, but I would suggest a pouch or bag of some kind, just as this toy attracts lint like crazy.

The packaging was a fairly nice, sturdy cardboard box, which arrives covered in plastic wrap. The box is black, pink, and white, and has "Envy by Jopen" written on the front. The back of the box displays a photograph of the Envy 3, and lists basic information about the toy.

The box has a little magnetic flap to keep the box shot. Upon opening this flap, you'll see a nice foam insert which holds Envy (and the charger) perfectly in place. My only complaint here is that Jopen did not include a storage pouch for the toy -- it's a high priced toy, and I had expected one.

The package could certainly be used for storage; it's sturdy, and it's fairly discreet until you look at the back of it. For gifting, though, I'd suggest wrapping it up, as the packaging isn't all that luxurious.

Many people will wonder how this compares to the Salsa by We-Vibe. I have the Salsa, and it is one of my favorite toys, but I think that I prefer the Envy Three a little bit more. The Envy Three is made out of silicone, whereas the Salsa is plastic; I personally prefer the soft silicone. Also, the Three is much bigger and is, therefore, insertable, unlike the Salsa, so it's a more versatile toy.

As for power? The Salsa does seem to be slightly more powerful, but I think that the Envy Three is a little more rumbly and deep, which is what I truly enjoy.
This product was provided free of charge to the reviewer. This review is in compliance with the FTC guidelines.