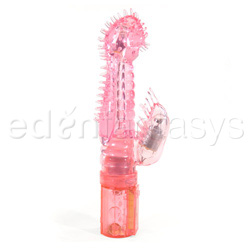 The clit stimulator is one of the most amazingly designed I&rsquo;ve ever seen. It&rsquo;s got long, wide tendrils at the tip and wider flaps at the base, so it would arouse both the clit and the labia. It also packs as much power as I&rsquo;ve ever seen in a clit stimulator, going from intense vibration at its lowest speed to blow-your-mind vibrations at its highest setting! The toy is quite noisy, but honestly, with this one I don&rsquo;t think I&rsquo;d care in the slightest!

The controls are also ideal, in my opinion. Instead of a bunch of complicated buttons, they consist of two sliding levers, one that controls the shaft and the other that controls the clitoral stimulator. This limits the functions of the toy, but I honestly think this is one that doesn&rsquo;t need all the bells and whistles. The controls are located on the battery pack, which holds 3 AA batteries that provide an incredible amount of power.

There&rsquo;s the good about the Fantasia. Now for the bad and the ugly. The head on the shaft is just too damn big. WAY too big. Like half the size of a tennis ball! Despite my best efforts and about half a bottle of lube, I just could not insert the thing. Not at all, not even partially. Bummer. This is one toy I really, really would have liked to take for a ride.
Follow-up commentary 3 months after original review
Nope. Still too big. Still with the large spiked head from hell. I'd hoped to maybe have some success when I had more experience with toys, but no luck. Be warned and read the reviews thoroughly before buying this one!
This content is the opinion of the submitting contributor and is not endorsed by EdenFantasys.com