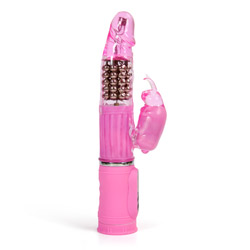 Overall, this is a fantastic item that I think beginners and advanced users would enjoy, and I am one hundred percent happy with my purchase.
Pros:
Powerful vibrations, multiple functions
Cons:
Length of the shaft is a bit too long, material is slightly sticky
Rating by reviewer:
5
useful review

This toy only has a slight plastic-y scent if you have it right under your nose, but it's not something I really notice. The material is very smooth and pleasant, though I find that if I don't have extra lubricant (be it from a bottle or myself) it is a little difficult to get it in at first. The shaft has some veins on it to simulate a real penis, but I don't think it actually adds anything to my sensation. The material is slightly sticky when dry, so dust or fuzzies from clothes can stick to it.

I like the design, but for me the only con was the length of the shaft. My vagina is not particularly deep, so I have to be fully aroused in order to have the whole shaft inserted. This rabbit is a larger toy, so it's difficult to hide in a purse, but it's easy to hide in a suitcase. I have put it in travel bags and haven't had it turn on by itself yet.

This rabbit is amazingly functional. There are 5 different speeds of vibration, but I typically can't get to the highest level because it is too powerful. There are also 5 different settings for the rotation, but I haven't noticed any change in them except for which direction it rotates. The first time I used it I was a bit shocked at its power (none of my previous vibrators came close). As it wears down the batteries, I will immediately notice the difference and have to put in fresh batteries. Operating this rabbit can be a little awkward at first as the controls are at the base, it's difficult to reach if you have short arms. I have rarely accidentally hit the wrong button while using this rabbit. The vibrator function is also on the louder side, so this would not be something to use in the next room while there is any company. I have used this in the shower without incident, but I have yet to try submerging it. I occasionally have one issue with the vibrator: the rotation stops if the vibration and rotation are running at the same time. I think this is a result of tight pelvic floor muscles more than a failure on the toy's part. I find the controls overall fairly easy to use, though I have not noticed much difference in the rotating function beside it going clockwise versus counterclockwise.

It is easy to take care of this toy. Just like most toys, clean it off with toy cleaners or soap and water. If you use soap, it will retain the soap's scent if there is any. It is also easy to change out the batteries when the time comes. I find the hardest part to clean are the ridges around the lower portion of the TPR shaft as stuff can get stuck in there. As for storage, I find that if you lay it down, the material has a slight sticky quality to it so fuzzies from clothes will stick to it.

This rabbit was my first, and I loved it. It was far more powerful than expected, and the only downside was the length of the shaft.
This content is the opinion of the submitting contributor and is not endorsed by EdenFantasys.com