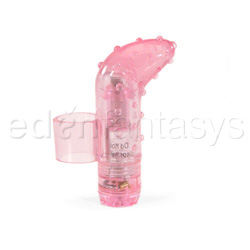 I personally believe this vibrator is best used in conjunction with other toys or as light foreplay. It didn't get me to the big O, or even a little one, although I had fun in the attempt. It's good for light stimulation, especially for someone who is overly sensitive. Personally, I got creative and used it to stimulate multiple areas: my clitoris, playfully inserting it into my vagina, just the tip slowly in and out without going all the way in, or just lightly teasing to work yourself up. It's also fun to rub it around all areas of your vaginal lips, around the clitoris and circling the outside of your hole.

This is a good toy for solo use but it would also be something fun for couples to use. It's a good way for a guy or girl to get their partner worked up without getting all the way there. A plus of this toy is that you can use it for a while without getting to that big moment which will make everything last longer/more enjoyable for people who like to stretch things out. It's also good to work up to a big O with the stop/start method and another toy. In my opinion, the best use for this product is as a foreplay to other toys or to a night of frisky sex.

Another negative aspect of this toy is that the vibration factor is very low so you have to push down hard to get the feeling you want. If you have ever used a toy that you have to push down on then you know it makes you sore, uncomfortable and when you try to finish things for yourself or your partner tries to get you to the end, it hurts. By then you're so worked up and horny that you need to finish or you will be left disappointed and frustrated. So in the pursuit of a climax you will wear yourself out, end up uncomfortable, and ultimately it will fall to you to finish things; something we as women already have to do all too often with the men in our lives. This is not something we want out of a device that is meant to make up for the dissatisfaction we already have in life and in the bedroom.

As a solo toy it is lacking in several areas, but it's worth the money if you use it with other toys and/or other people. It's like working out but only doing the stretches. It makes your body feel good and get's you started, but won't give you the benefits of a full workout.

The texture does add extra stimulation by the way it's made. I would say this is something more for beginners as the amount of pleasure would be too low for someone who uses toys frequently.

It is pleasant in the mouth; it doesn't have a bad taste and it can be sexy to use on your partner. Tease them by slowly licking it, tasting their fluids or yours. Plus it's big enough that the choking risk goes down significantly as well as the gag factor. This is just a suggestion. I've never tried this myself but find the idea interesting if you have enough talent. I am sure you could place it between your teeth, hold it there (it's very lightweight) and then use it on any part of the body you find enjoyable.

The design is functional, though not exactly sexy. The shape is good and I'm sure it would be good for insertion, though I didn't choose to use it that way. The size is nice as it's easy to hold and easy to hide. Again I'd say this is more appropriate for beginners.

It is very discreet and I think it would be perfect for travel as it isn't immediately obvious what it is unless you're a user of sex toys. You could always deny what it is. It's shaped similar to a finger so you could always claim it's for your hand, carpel tunnel or finger massage. Not everyone will believe you but it would be easier to pass off as something else than most sex toys. You could even try to claim that your doctor thought it would be good to use to help your carpel tunnel because it isn't too heavy and won't aggravate your condition. A friend of mine (she wasn't making excuses either as she is open about her sex life and toys) actually used to use a vibrator to massage her head because she said it was stronger than any other she found. So you could always tell people that's why you have it. If you're convincing, you could make them believe you or just say it was a gift.

For me, the vibration is the best function and, again, the lack of vibration strength is what is negative about it. It's extremely easy to use and fairly self explanatory.

It wasn't silent, but it was quiet enough. I used it in the bathroom with the door closed and you couldn't hear it through the door. It performed just as well in the water as it did out of the water.

Use it with another toy or in conjunction with sex. Also be careful how hard you press in order to avoid pain and soreness.

I had no orgasm any time I used it, but it was fun for extended use.
Follow-up commentary   I still like it 3 months after original review
I still think this is a good toy for foreplay and for use with a partner. It's especially great to get you in the mood. One way I've used it is to prepare for sex with a partner that isn't into foreplay. If they can't get you off this can get you started. As for solo use the only way I would suggest using it is with other toys. Find a toy that gets you to the finish line and use this as a warm up. One way you could utilize it during sex are to stimulate your clitoral area as he fucks you. Also, you could insert it anally or if he/she is fucking you anally you can insert it vaginally to add a little something extra. So, in conclusion, it's great for foreplay but make sure you have someone or something to get you your orgasm cause it's never fun to be left disappointed.
This content is the opinion of the submitting contributor and is not endorsed by EdenFantasys.com

Reviewed by FunAndIrish (Eden Writer) Want to have fun in new and interesting ways...
Rank
5.1
wrote 12 reviews
This review was edited by
Comments
Make a post
Forum
No discussions yet.
Thank you for viewing Finger fun – finger massager review page!
Top