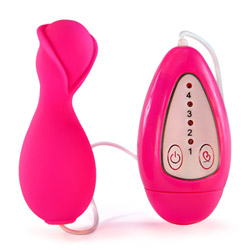 For A Flowering Sexual Being

Affordable and basic, the Love Bud can be one of the best toys for a beginner. Skip the jelly dongs, and come straight to a toy that's straightforward, made from good-quality materials, and provides a decent buzz. You'll probably want to upgrade to a more specialized toy as you figure out what you love, but this toy provides a versatile use for both solo and partner enjoyment.
Pros:
Extremely quiet
Affordable
Good-quality materials
Cons:
Control structure is odd
Basic
Similar power levels
Rating by reviewer:
4
extremely useful review

The separate remote control lends itself well to solo or partner play. With the intensity levels clearly illuminated on the remote, it makes it simple for partners to know exactly what level they're subjecting their loved ones to. For self-use, this also can come in handy as well.

Perfect for those who are worried about phthalates and other material add-ins, the Love Bud is made from body-safe plastic and silicone. The hand-held remote is made from a slick, smooth plastic while the vibrating toy itself is made from a silicone. With the remote's slick plastic surface, it can be difficult to get a good grasp on the controller during use, but a quick wipe down of the remote easily cleans it from any lubricant because of its streamlined, no-crevice design. The silicone of the vibrator is slightly plushy with a barely-noticeable give. It feels silky smooth, and it's a pleasure to run your fingers (and more private areas) over the silicone sensation of this vibe.

For those that like all of their controls in a one-stop place, the Love Bud is going to be a pleasure. All of the control buttons are located on the remote of the toy. It includes two control buttons as well as four power levels - all of which come with a corresponding red light to simply let you (or your partner) see which power level you're currently using. None of the control functions are located on the vibe itself.

However, this sex toy definitely looks like a sex toy. No one is going to mistake it for something else, so keep it hidden if you don't want people to know you own a toy.

This is probably one of the quietest vibrations I've ever messed with. It's so quiet that it's hard to hear it while I'm holding it. It definitely cannot be heard outside of a closed door - which makes it perfect for when discretion is required. It doesn't seem to have the design that would make it a good "in public" toy, but it's great for crowded living situations.

Perfect for those lazy cleaners among us, the Love Bud toy is entirely waterproof. This means you can clean it without too much worry to getting water where it doesn't belong. The remote does include a rubber seal which should make it waterproof as well, but I wouldn't get too careless with water near the remote - just in case.

Cleaning the toy is simple as well. While the packaging is pretty minimal about the toy itself, it does include care instructions. It can be through a regular wash with using warm water and anti-bacterial soap. For special cleaning, it can go through a sterilization by wiping it with a 5% bleach solution. This one can not be boiled for sterilization.

As it's made from silicone, it'd be best to only use water-based lubricant with it. As it's an external toy and it will slicken up really easily with bodily fluids (with the silicone material), you may not need to use external lubricant at all.

Storage is simple. It can definitely go back in the original packaging, but as it's made of a pretty non-tacky silicone, it doesn't seem to attract much hair or dust, so you can store it how you want. It's also small enough to fit into a standard sandwich plastic baggie. Don't forget to remove the batteries (to prevent corrosion) and insure the toy is dry before storing it.

Perfect for wrapping, the packaging is in a standard rectangular shape. Just tape down the top, and it'd be ready to wrap if need be.

Packaging clearly displays the "EdenFantasys" logo as well as some basic information about the toy including how to clean it and store it. No information about usage is included. Packaging is more informative than some, but it's still not super informative.
This product was provided free of charge to the reviewer. This review is in compliance with the FTC guidelines.