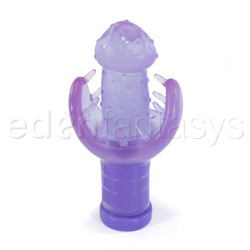 Definitely not one of my favorite toys. Too small to actually be effective. I most likely wouldn't recommend this to my friends.
Pros
Only takes 2 AA batteries.
Small enough to pack easily.
Cons
It's very loud!
Almost too small to feel much.
Rating by reviewer:
2
useful review
After getting the Asian Odyssey|Fujiko's Asian Odyssey vibrator by California Exotic in the mail, I was really excited to try it out. I carefully opened the box, and examined the product. First off, I noticed that it was really just as unusual looking as it is in the picture. Secondly, I noticed that it was fairly small.

Oh well, I thought. Sometimes good things come in small packages. I popped in 2 AA batteries, and went off to my bedroom to try it out. I turned it on, and yikes! It started humming very loudly. The vibrations didn't feel very strong for as loud as it was humming, even though I had it all the way up. I applied some lube, and inserted the Asian Odyssey. It went in fairly easily, despite the head being large and rather round.

Right away, I realized the two little appendages that were supposed to be &quot;anal and clitoral ticklers&quot; were far too small to reach the anus and the clitoris at the same time. I had to change the angle depending on which area I wanted to stimulate. The shaft of the toy was also too small to stimulate anything. It was just barely inside me. There was no way this thing was going to hit my G-spot. As much as I tried, I was unable to actually orgasm using this toy.

Overall, I was incredibly disappointed with this toy. It looks far more interesting than it actually is, and it did not make me orgasm as the product description claimed.
Follow-up commentary   I still don't like it 58 months after original review
I ended up getting rid of this finally--takes up too much space and doesn't do anything for me! I did try it out one last time, and sadly it still wasn't any better.
This product was provided free of charge to the reviewer. This review is in compliance with the FTC guidelines.