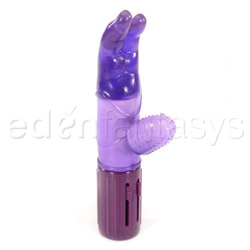 A fun toy that definitely gets you into a frenzy if you use it as an insertion toy. The fingers stimulate your g-spot without overdoing it and the vibrations are easily controlled and add to the spicy feeling that the fingers create when inserted.
Pros:
At the right angle you have wonderful g-spot stimulation.
Cons:
The stimulation of the fukuokus' rotating fingers are not as good as I thought.
Rating by reviewer:
3
extremely useful review
As this was my very first assignment for Edenfantasys, I was quite nervous with anticipation for the Fukuoku to arrive. The package arrived within a week and as I opened the box, I noticed how well packaged the product was.

Laying back, I switched on the rotating fingers first and placed them against my clit. That didn't cause too much friction and in order to have any effect whatsoever, I had to press the fingers against my clit pretty hard. It wasn't the kind of yummy feeling I had been expecting. Due to the thumb being in the way, resting on my tummy, I couldn't get the angle right, so I tried positioning the fukuoku the other way round, with the thumb pressing against my vagina, but that resulted in the fingers staying in the same place and the shaft itself rotating, so that was no good either.

So, time for a different change of tactics. I turned off both the rotating fingers and the vibrations, inserted the fukuoku as far into my pussy as it would go and then slowly turned on the rotating switch. Immediately I felt a rush of pleasure gliding through me, and as I turned up the speed, the fingers began stimulating my g-spot in a magnificent way. To add to the delight, I switched on the vibrations and that sent waves of excitement up and down my body. Moving the fukuoku slightly in and out of my pussy as the fingers caressed my g-spot and the thumb stimulated my clit, it didn't take me long to reach an orgasm. The vibrations are the icing on the cake on this fun vibrator and I'd want it with me as a new friend for lonely nights anytime!

The only less positive point is that it should have been about an inch longer, because to reach my g-spot I had to sit at a certain angle, it didn't touch the right spot when  just lieing down on my back. The other minor point is that the fingers rotate less strongly when the vibrations are on.
This product was provided free of charge to the reviewer. This review is in compliance with the FTC guidelines.