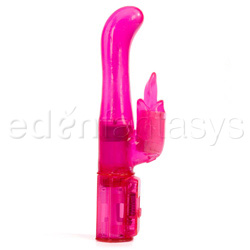 I'd give this toy a 4 out of 5 vrooms (level of vibrations) because it is really intense when turned up all the way. As for noise level it really isn't that bad when in use because the contact muffles the noise, but it's still a 3 out of 5 bees (noise level). The controls on this toy are conveniently located on the base of the toy and positioned perfectly for adjustment with the slight slide of your thumb. I also found this toy to be easily cleaned, which is always a bonus.

The biggest problem I had with this toy was that it was heavier than I expected. My arm was tired long before I was. Also, it takes batteries, which is great because it's wireless, but not so great because it's a powerful toy and I expect it to take a lot of batteries in it's life. Finally, if I could change anything, I'd make it so instead of rotating at the tip, I'd make the g-spot part vibrate also for more intense contact.