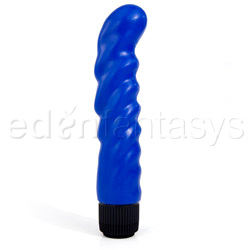 The Signature Vibe is substantial and accented with sexy, bulging ripples. If you're looking for a dedicated internal vibe targeted for your g-spot, you've found your match. But don't expect the subtle, weak vibration to do much for your clit.
Pros
Virtually silent, great internal g-spot stimulation, good weight, and feeling of fullness
Cons
Very weak vibration
Rating by reviewer:
3
useful review
With the Playgirl Signature Wave, I was hoping to get a multi-function vibe that would do double duty, internally and externally. I loved the idea of the sexy, spiraling ridges and g-spot curved head, as well as the multi-speed wheel to control the strength of the vibration. That was the idea at least.

When I finally got it in my hands, I found that the vibe had a decent girth and weight, as well as just enough give in the material to make me think it was going to be a comfortable ride. It's made of a silicone-blend, so it's more hygienic than materials like jelly, which is also a plus.

I inserted the batteries (psst: it doesn't matter which battery goes in where) and turned the baby on. And, well.

The good news about the Signature Wave is that it makes almost zero noise. The hum of my laptop is louder than the vibe on its highest setting.

The bad news is that the vibrations produced are only slightly stronger than the amount of noise it makes; that is, a little stronger than none. (Grr! Arrgh! Much gnashing of teeth on my end when I found this out.)

It's, uh, safe to say I was disappointed when I found out how little vroom the Signature Wave was capable of producing. I did manage to come though; the vibes are a low, deep thrum concentrated at the tip, and the sensation of the solid, soft give of the silicone against my clit is what helped push me over the edge.

The Signature Wave's saving grace is its use as an internal, g-spot toy. The curves hit all the right spots. The curved head is substantial&mdash;actually, the whole thing feels substantial&mdash;and there's a great feeling of fullness once it's in. There are subtle ripples on the underside, which didn't do all that much for me, but the wider-spaced ridges on top felt amazing rubbing the wall opposite my g-spot.

As a word of caution for beginners, I'd perhaps suggest another first vibe than this one, as the girth may be wider than it appears in the pictures. Definitely not impossibly so, but personally, I couldn't fit this vibe the second time I tried it (but I'm kind of small to begin with). I had fun with a slimmer, more subtle vibe instead, which was also good and dandy.

Overall, I recommend the Signature Wave for the people who are looking for a dedicated internal vibe because while the vibrations produced are too subtle for clitoral orgasms, they feel amazing internally, never too overpowering or numbing, which is a problem I've experienced with stronger vibes.
This product was provided free of charge to the reviewer. This review is in compliance with the FTC guidelines.