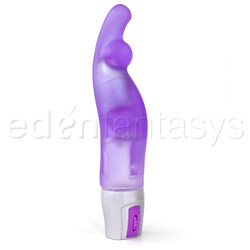 I was disappointed in this toy. It will not be a frequent addition to my bedroom sports. I may try it again, maybe alone. I'm not sure what to do about the smell of the material though. That could be a deal breaker in my book. Overall, I would rate it two stars, three vrooms (the vibration is strong, but not in the right places), and three bees.
Follow-up commentary   I don't like it anymore 29 months after original review
Since writing my first review on this product, I've only attempted to try it out once. It just doesn't do it for me and is taking up space. Time to send it to the garbage. I still believe that the controller on it can harbor bacteria, making the product unsafe.
This product was provided free of charge to the reviewer. This review is in compliance with the FTC guidelines.