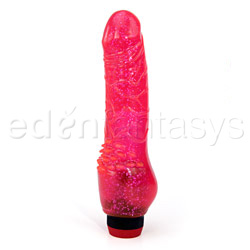 Good, but not the best!

I can from time to time still enjoy this toy, although I did have some issues with it. If the nubs that rest at the base of the toy get a little annoying for me, I can just turn the vibrator so they don't rub me the wrong way, which is helpful. When I'm in the mood for something a little less powerful than a direct bullet sensation, this is where it's at! Also, using this with bullets and other toys was pretty awesome!
Pros:
Nice size, pretty color, no scent.
Cons:
Not realistic, battery cover fell off in use.
Rating by reviewer:
4
useful review
This vibrator was something I was really excited about getting because, in the reviews, I read about its nice intensity. However, when I got it (although it did end up being enjoyable), I didn't like it as much as I had hoped. For starters, I love a product that packs a PUNCH and can really show up my other toys with its vibes. I'm picky with the intensity, and I was a little let down because I was hoping for a bigger punch. If you don't need a really intense vibration, this shouldn't be a problem for you!

Also, I felt like the material wasn't comfortable enough, and it was rather stiff (not in a good way) for me. I tend to enjoy a more real softer feel when buying toys so this was a little too hard for me and didn't allow for complete comfort while inserted.

I did like the bright happy color; the hot pink was so fun and not boring like some more realistic toys can be. The fun color certainly is not a deal breaker, but it adds some spice.

I was immediately attracted to the nubs that were right about where the clit would rub during some fun time because I thought that stimulation would be nice with the vibrations. However, during use, these nubs were slightly painful for me. They were so hard that it wasn't really enjoyable if rubbing too much or too hard.

Lastly, I don't know if this was just my specific vibe, but the area where the batteries are inserted, the cap fell off a couple times while in use, so that could be annoying. It only occurred a few times, so it wasn't too big of a deal, but I'm sure if it happened a lot, you could throw some tape over it and enjoy it that way.
Experience
If the nubs rub your clit like they did for me, you can try turning the vibe around so they don't rub you there and try that out. It did help!
Follow-up commentary   I still like it 4 months after original review
Overall, I still LIKE this toy, but I still have the same problems with it!

The nubs on it where the clit rubs during play are kind of harsh on my sensitive spots. I DO like it, but I don't tend to use it too much, as I have toys that fit me better down there making for an overall more pleasurable experience. It's not a super great toy for toy snobs out there, but the vibrations are doable with the added fullness the vibe leaves you. If you are, however, hard to please in terms of vibrating power, you might want to look elsewhere.

My only other complaints at this time are that the tip of the vibe feels somewhat sharp to me and I would appreciate it to be a bit more natural, lastly, the dial on the bottom which controls the speed is easy to move during stimulation which can be anti-climactic.
This product was provided free of charge to the reviewer. This review is in compliance with the FTC guidelines.